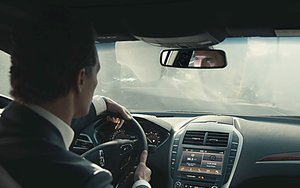 “He is a natural fit with Lincoln and where we are going as a brand,” Andrew Georgescu, U.S. marketing communications manager, Lincoln Motor Co., tells Marketing Daily.

“Lincoln and Matthew McConaughey are forming a collaboration built on the shared values and mindsets of being warm, inviting and authentic,” he says.

Directed by award-winning storyteller J.C. Chandor, the three spots — “Shave,”“Midnight” and “Ensemble” — are under the tagline “It’s Like That” and were created by Hudson Rouge.

The Lincoln MKZ and MKZ Hybrid are targeted toward younger individuals (35-50 years of age) with an average household income of $150K+, Georgescu says.

They “have an independent spirit where they have mainstream success while inside they feel unique and original. This target is dramatically open and flowing, creating the excitement of possibilities,” he says.

The spots are filmed in a style and tone that conveys exhilaration and the visceral feeling of driving, says Jon Pearce, Hudson Rouge chief creative officer.

“The new ads bring the attention back to the MKZ, a premium midsize sedan that has been Lincoln’s best-selling vehicle since it arrived in showrooms three years ago as the first all-new Lincoln,” Pearce tells Marketing Daily.

In “Shave,” McConaughey sits in a barber’s chair receiving a professional, straight razor shave. As the barber ends the shave with a steaming hot towel, we see the new, 2017 Lincoln MKZ cutting through the fog on a winding road, conveying the “It’s like that” moment of exhilaration and precision, Pearce says.

“Midnight” shows McConaughey arriving at an impressive Modernist home at night, dressed in a fine, tailored suit and walking out to a beautiful infinity pool. He stands at the pool’s edge fully dressed, and looks out. He recalls driving the MKZ, the two worlds mesh and he lets himself fall backwards into the water, fully dressed.

“The moment he hits the water, we see the new 2017 Lincoln MKZ accelerating out of a dark tunnel and into a nighttime rain, expressing the same ‘It’s like that’ exhilaration of diving into a pool,” Pearce says.

“Ensemble” shows a group of musicians (Sharon Jones & the Dap Kings) playing in a beautiful indoor setting. As the camera pulls back, the music builds, and Jones begins singing a cover of “Midnight Rider.”

“As they continue to play, the camera recedes further back and we now see the performance through the grille of the new 2017 Lincoln MKZ. Inside the vehicle, we see McConaughey as that ‘midnight rider’ enjoying his drive,” Pearce says.