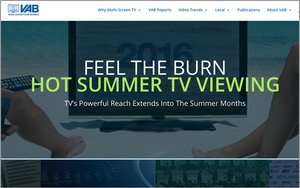 Expanding the scope of its video trade efforts, the Video Advertising Bureau will absorb the Cinema Advertising Council, the national trade association of in-theater advertising networks.

The VAB will merge operations to create a “single industry voice for America’s premier video providers.”

Under the terms of the agreement, CAC will continue to provide select services independently, such as maintaining its own Web site. Financial terms of the deal were not disclosed.

The VAB now says it represents $55 billion in programming investment and $67 billion in advertising revenue, with TV reaching 292 million viewers (98.7% of the U.S.) and cinema attracting 1.2 billion ticket purchases.

Sean Cunningham, president/CEO of the VAB, stated: “Ours is the programming that dominates all screens and generates the appointment viewing at scale that advertisers need more than ever.”

The CAC was founded in 2002. Among its members are Screenvision, National CineMedia, On The Wall and Spotlight Cinema Networks