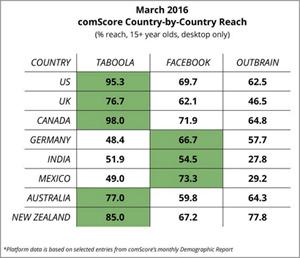 In more than 50 countries, Taboola said it more than doubled its reach from 500 million unique users a year ago. The company first launched its discovery platform in 2010 and is focused on evolving its personalization and predictive technology.

Taboola’s milestone comes as the company expands globally into various markets, including Brazil, Mexico, Korea, China, New Zealand and Russia. In recent months, it has partnered with Microsoft’s MSN and Verizon’s AOL to help extend reach.

Of the 1 billion user milestone, Adam Singolda, Taboola CEO, told Real-Time Daily: “We believe there is a ‘winner takes it all’ market when it comes data. It's either you know the person behind the screen, or you don't. Knowing if someone is a video fan, or if someone tends to subscribe to things, are binary questions that enable publishers to drive true personalization on their sites.”

Singolda explained that while Facebook has amassed a huge amount of data, Taboola’s goal is to draw from its own “trove of information about how people consume content across the Web to empower publisher partners to leverage personalization technology and free, anonymous, actionable user data to build audience, engagement and revenue.”

Using its predictive technology, the firm analyzes hundreds of real-time signals, including device type, geography, context, referral source, social-media trends to match people with the topics that are most likely to interest them.