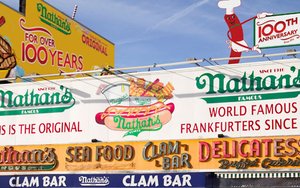 Nathan’s Famous restaurants are marking their centennial year in 2016, and national and local celebrities are on board for a radio campaign promoting the landmark anniversary.

In a series of 60-second ads launching May 16, Whoopi Goldberg, Regis Philbin, Kathy Griffin and Walt Frazier will share their favorite memories of the brand famed for its hot dogs and its flagship Coney Island location, and wish Nathan’s a happy birthday.

“The overarching style of these commercials is ‘celebrity open mic,’” said Don Raskin, senior partner of MME, Nathan’s’ agency of record for 26 years, which is handling the anniversary campaign’s creative and media. “There was no formal script and we only chose people who had a passion for this iconic brand.”

The ads will be broadcast through Labor Day on New York stations including WFAN, Z-100 and Lite-FM.

The summer-long campaign will also include print ads, out-of-home and in-store materials.

The anniversary will also be celebrated with special events and promotions, starting with the Coney Island location’s selling 5-cent hotdogs -- the price of the dogs when Nathan’s opened in 1916 – from 11 am to 2 pm on May 28.