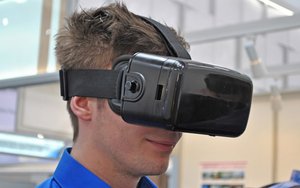 Virtual Reality is catching on. Slowly.

According to new research from Parks Associates, 2.3 million U.S. households with broadband (about 2%) currently own a virtual reality headset. About 5% of consumers with broadband intend to purchase a headset in 2016 (up from 1% who made a purchase last year).

“It’s pretty close to what I’d consider average [adoption],” Barbara Kraus, director of research for Parks Associates, tells Marketing Daily. “There are very few things that grow exponentially like the smartphone. Part of the issue with VR is that it’s got very low awareness.”

While much anticipated in tech circles, virtual reality is still relatively unknown among general consumers, where only about 7% are aware of the headsets, Kraus says. But with a few high-profile models coming to market over the next few months (such as Facebook’s Oculus and Sony’s PlayStation VR), general consumer awareness should pick-up, and adoption will be much higher among among enthusiastic techies like gamers.

“It’s going to be more of a hobby for people who are interested in the immersive experience, which you get more so from gaming than other devices,” she says.

Among general consumers, however, products like Google Cardboard (literally a piece of cardboard that folds to fit a smartphone) and Samsung’s Gear VR, both of which fit smartphones, are much more likely to catch on, Kraus says. “It’s not a big investment,” she says. “You can try it out and see if it’s something you’d like. I think they will be what drags this into the mass market.”

The other thing that will drive awareness will be the content that is produced for the headsets. While gaming is an obvious avenue, other experiences — like virtual tourism or adventure travel — could draw interest from different areas.

“It’s definitely going to have to be content you want to see,” Kraus says. “I think there’s a wide variety of content that needs to appeal to the different market segments.”