Cranston Goes 'All The Way' With LBJ, But Will You? 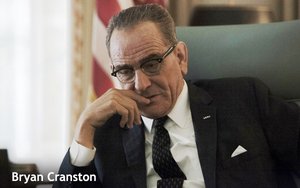 Despite some flaws, and what I assume are some historical inaccuracies, this made-for-HBO movie about the presidency of Lyndon Johnson is more than salvaged by Bryan Cranston’s performance as LBJ.

The movie, titled “All the Way” (from the LBJ campaign-button slogan “All the way with LBJ!”), is adapted from the stage play of the same name for which Cranston won a Tony Award.

It is a very attractive performance, and you can’t take your eyes off of Cranston, even when his portrayal of LBJ borders on ludicrous caricature. Here again, as someone who never got to witness the behavior of Lyndon Johnson in person, I can only surmise that some dramatic (if not comedic) license is being taken here in an attempt to get at the essence of Johnson, and in the process, also entertain audiences.

It’s true that Johnson had a reputation for coarse, pungent language and certain social habits that are not practiced by anyone I know. Chief among these is Johnson's reported predilection for carrying on conversations with aides and other visitors while sitting on the toilet with the bathroom door open.

In the TV movie -- which premieres Saturday night (May 21) -- Johnson has one such conversation with Vice President Hubert Humphrey (Bradley Whitford) who paces uncomfortably just outside the bathroom door. Did this really happen? Well, maybe it happened with someone other than the vice president, but who knows?

The movie traces the Johnson presidency from the assassination of President Kennedy through the fight to enact civil rights legislation and Johnson’s efforts to manage the escalating war in Vietnam.

In the run-up to the Civil Rights Act of 1964, we see Johnson cajoling and deal-making with senators and House members in a manner that seems authentic, particularly when Cranston’s Johnson leans in and goes nose to nose with reluctant lawmakers. We also see this LBJ on the phone, cradling the handset in a way we’ve seen before in photos and film of the real president.

But when watching the political machinations, you get the feeling that there’s a great deal of simplification and historical compression going on here. The people who make these kinds of historical movies always take that kind of license and then explain that for the purposes of storytelling, short cuts must be taken and characters have to be combined.

Personally, I have nothing against this approach as long as the writers and producers of movies and plays such as this one make no claims that they’re being accurate. They’re not, but that doesn’t mean you shouldn’t enjoy their work.

The problem with “All the Way” was that, after a certain point, I didn’t feel like going “All the way” with this movie, which clocks in at two hours and 15 minutes and began to feel over-long after about an hour and a half. Moreover, as I may have indicated in a recent column about PBS’s apparent obsession with reliving the 1960s over and over again, I am not one to welcome yet another TV movie about the strife of that bygone era. Haven’t we gone over all this before, again and again and again?

I also may have detected some lapses in writing judgment in the script for “All the Way” when characters use phrases that I have a feeling were not in wide use -- or possibly any use -- in the 1960s. Twice I heard the phrase “reach out,” as when LBJ said he would “reach out” to the leadership in the Senate for support. Later, Martin Luther King (played by Anthony Mackie) is said to be “reaching out” as well. I’m probably wrong about this, but isn’t “reaching out” a phrase that only came to be widely used recently?

At another point in the movie, Lady Bird (Melissa Leo) asks her husband a question about Humphrey: “Is Hubert on board?” she asks LBJ. Would Lady Bird really say “on board”? Did anyone say that back then?

Oh, well, what’s the difference? Cranston’s LBJ is the kind of performance they award Emmys for. They might as well inscribe his name on an Emmy statuette already, because it’s almost a certainty he’ll win one next September.

“All the Way” premieres Saturday night (May 21) at 8 Eastern on HBO.