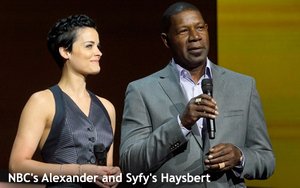 NBC Universal packed a lot of networks, stars and even an elaborate dance performance into a two-hour upfront presentation Monday in New York.

It was designed to position the company’s many television platforms as one wide-ranging portfolio offering the most extensive reach in the TV industry.

With the overall theme “Reach redefined” stenciled on the seat backs of every chair in Radio City Music Hall, the company gave more or less equal weight to a number of its networks.

That's a departure from focusing only on its NBC broadcast network, as is customary during this final week of the long upfront presentation season.

“Welcome to the biggest upfront that has ever existed,” said NBC Universal CEO Steve Burke, the first of the company’s executives to appear on-stage. He appeared after an opening segment in which Jimmy Fallon came down one of the aisles to the stage while singing a comedic song about the company written especially for the occasion.

“It’s the first time two broadcast networks [NBC and Spanish-language Telemundo, owned by NBCU] and cable properties are being presented together,” Burke said. “We did it because over the last few years, we had eight upfronts. And you think of the amount of time all of us spent -- two hours at each upfront, cab rides and everything else -- the amount of time and money … It really made sense to have one unified upfront.”

But more than just saving on cab fare, the all-in-one upfront was intended to convey to advertisers that the company’s entire portfolio is open for business. NBCU stands ready to offer access to any and all of its platforms in any number of combinations.

Linda Yaccarino, chairman of advertising sales and client partnerships, put it succinctly during her segment onstage. “Why one upfront?” she asked, then provided the answer: “It’s because this is how we sell, as one portfolio.”

In his opening remarks, Burke promised the whole thing would wrap up in two hours, and his promise was kept. In her remarks, Yaccarino promised the audience would not see a scheduling grid or hear from programming executives announcing new shows time slot by time slot.

Instead, the presentation was divided into categories in which both new and returning shows were promoted, with the stars of both appearing in pairs on stage, regardless of their networks. For example, Jamie Alexander of NBC’s returning series “The Blindspot” appeared on stage with Dennis Haysbert, one of the stars of a new drama series on Syfy announced Monday called “Incorporated” (pictured, above).

Much of the presentation was devoted to interludes in which a single star or a pair of them would come onstage to introduce a trailer, or “sizzle reel,” for a couple of upcoming shows. There so many of these sizzle reels, that NBC “Late Night” host Seth Meyers joked during a monologue he delivered late in the presentation: “Watching sizzle reels at the upfronts is like meeting your brother’s new girlfriend at Thanksgiving. She seems great, but you don’t want to get too attached because chances are she won’t be around next fall!”

The presentation did not lack for star power, however, which supported the presentation’s aim of emphasizing the sheer size of NBC Universal and its shows and networks.

Among those who appeared were Mariah Carey (who has a reality show coming up on E!), Arnold Schwarzenegger of “The New Celebrity Apprentice” on NBC (he has replaced Donald Trump), Kristen Bell (of the new NBC sitcom “The Good Place”), America Ferrera (of “Superstore” on NBC), the stars of “Mr. Robot” on USA Network (Rami Malek and Christian Slater), Matt Lauer and Savannah Guthrie of “The Today Show,” and even Miley Cyrus and Alicia Keys, who came onstage together to promote NBC’s live events.

At one point, a large dance troupe appeared on-stage and in the auditorium’s long aisles to promote this summer’s Olympics in Rio De Janeiro.

Some of the networks – such as Oxygen, MSNBC, CNBC and a few others – seemed to get short shrift (or no shrift). But the point was made: NBC Universal has a lot on its plate.

As Burke noted in his remarks, “If you add up the combined ratings of our cable channels, the ratings impact is greater than CBS, Fox or ABC. So today’s upfront combines the strongest [broadcasting company] and the strongest cable company. In fact, on an average night, the channels that you’re about to hear from represent about 20% of all of the rating points on television.”