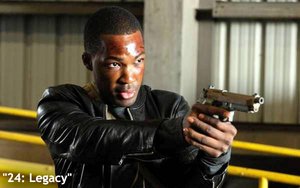 Fox executives emphasized a fairly large number of new series for fall and mid-season at the network’s upfront presentation Monday, but at least four of these “new” projects were based on old concepts.

There were revivals, such as the return of “24” with the new series called “24: Legacy,” and a new “Prison Break” featuring the same principal characters as the first version of the series.

The original “24” ran on Fox from 2001 to 2010. It was revived once already for a single season in 2014 under the title “24: Redemption.” The new “24: Legacy” has a whole new cast, including Jimmy Smits. Corey Hawkins stars as the new series’ principal terrorism fighter this time around.

The original “Prison Break” aired from 2005 to 2009. In the new one, the escape seems to be from a prison in the Mideast, according to a trailer that was shown at the upfront at New York’s Beacon Theater.

The stars of the original “Prison Break” who are returning for the new one all appeared on stage at the upfront: Dominic Purcell, Wentworth Miller and Sarah Wayne Callies. She had already appeared earlier in the day on Monday on stage at the NBC Universal upfront at Radio City Music Hall to promote her USA Network drama “Colony.” Appearing at two upfronts in the same day is a rarity in the TV biz.

Then there were two drama series adapted from, or at least inspired by, iconic movies from decades ago: “Lethal Weapon” (the first movie in the series was released in 1987) and “The Exorcist.” (The original movie is from 1973.)

But in addition to these four projects stemming from TV shows and movies past, the Fox presentation emphasized a number of other new shows with more contemporary themes. These included “Shots Fired,” a drama in which a cop fatally shoots a young man who was unarmed. The twist: The cop is black and his victim is white.

Another drama series, titled “Pitch,” is about the first female pitcher to make it to the major leagues.

Fox announced another music-based drama from producer Lee Daniels, creator of the network’s biggest hit, “Empire.” The new show is called “Star,” and it centers on a young woman who rises from a hardscrabble childhood to become a music star in Atlanta. Queen Latifah plays a surrogate mother for the young woman who apparently has no mother of her own.

Dana Walden, co-chairman and co-CEO -- along with Gary Newman -- of Fox Television Group, explained that the network’s lineup was designed specifically to hit various targets sought by advertisers. “We’re programming a range of premium content to help you reach all of your targets,” she told the ad reps in the upfront audience.

“You want to be a part of that aspirational world of music that engages women? You’ll have ‘Star’ from ‘Empire’ creator Lee Daniels,” she said, making the network’s pitch. “How about an environment of empowerment and inspiration? Wait until you see ‘Pitch.’ Dramas that deliver men in a weekly bro ride? Get ready for ’24,’ ‘Lethal Weapon’ and the return of ‘Prison Break’,” she said.

While the emphasis at this upfront was on Fox Broadcasting, the presentation also touched on other co-owned properties, including FX and National Geographic Channel. The upfront also promoted next winter’s Super Bowl--– No. 51 (LI in Roman numerals) -- which will be on Fox. The new “24: Legacy” will get a boost when it premieres right after the game.

Separately, Fox News Channel anchor Megyn Kelly made her Fox upfront debut when she came on stage to promote her upcoming special airing on Fox (not the news channel) Tuesday night (May 17), including an interview with Donald Trump.

The network also promoted next October’s live broadcast of a new production of “The Rocky Horror Picture Show,” starring Laverne Cox of “Orange is the New Black.”