In April 2016, analysis of Nielsen data from Pivotal Research Group shows that advertising loads grew nearly 2% to 10.7 minutes per hour over April 2015 for 18-49 viewers in the Nielsen C3 metric, the average minute commercial rating plus three days of time-shifted viewing.

Brian Wieser, senior analyst at Pivotal, said: “Network groups increased commercial loads to support growth in inventory for sale above and beyond changes in ratings.” His analysis says there was 602.1 billion national TV commercial impressions.

Although Viacom has said it has been looking to reduce commercial ad loads at some of its networks overall, Viacom networks average more commercial gross ratings points than any other network group. This came to an average of 14.9 minutes of national advertising per hour in April of this year versus 14.8 in April 2015. Viacom also has the greatest share of C3 commercial time among 18-49 viewers -- at 16.4%.

On a percentage basis, Discovery Communications, NBCUniversal and AMC Networks were three TV network groups showing the greatest upward change. Discovery rose 4.2% to 9.9 minutes per hour, while NBC increased 3.7% to 11.3 minutes per hour, and AMC rose 3.3% to 12.3 minutes. 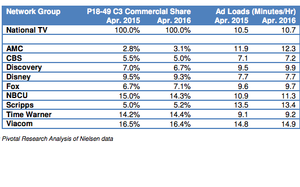