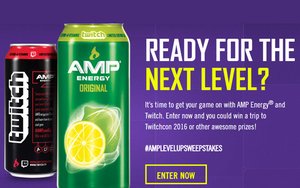 PepsiCo’s AMP Energy drinks brand has partnered with Twitch, the gamers’ social video platform and community, on a summer “Level Up” promotional campaign.

The special original- and cherry-flavor AMP cans, available at retail through August, bear the Twitch logo and promote the #AMPLevelUp partnership.

The program marks the first time that Twitch’s logo has been used on any non-gaming retail product.

One sweepstakes is limited to Twitch’s community of 1.7 million broadcasters. Between now and Aug, 6 (Thursday through Sunday, between 8 and 10 pm ET), they can enter by typing #AMPSweepstakes into their Twitch live-stream titles. Prizes include a home page carousel placement takeover, limited-edition hoodies, and cash.

To enter the other sweeps, non-broadcaster fans need to follow AMP Energy on Facebook or Instagram, and tag a photo of themselves with an AMP Energy Twitch can with @AMPENERGY and #AMPLevelUpSweepstakes.