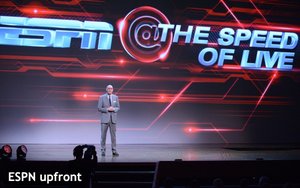 ESPN played up its biggest strength at its upfront presentation in New York on Tuesday, as the home of the ultimate in live-event programming: Live sports.

The tagline seen repeatedly during the presentation at the Minskoff Theater in Times Square said it all: “ESPN @ The Speed of Live.”

Onstage, the network’s execs repeatedly hammered home the point that ESPN viewers tune in with great anticipation that they will see something dramatic and unpredictable — and they are not often disappointed.

“College football and the U.S. Open – two reasons why 120 million people will be with us Labor Day weekend,” she said. “That’s one-third of the country — people getting back to school and back to business.

“So plan for Labor Day the same way you plan for Thanksgiving,” she said, noting the plethora of college-football games that will be seen on ESPN that weekend as well. “Thanksgiving kicks off the holiday buying season, and fans have a lot to look forward to.”

The live-event mantra has been taken up by all of the biggest TV networks in their marketing and promotion efforts in recent years. It's a way of setting themselves apart from smaller networks and digital content services. For the broadcast networks, live events encompass not only big-ticket sports events, but also entertainment awards telecasts, and in recent seasons, live musicals.

But for ESPN, live sports — including the NFL, NBA, NCAA basketball and football, U.S. Open tennis and other top-drawer events — is its bread and butter. And when the ESPN networks aren’t airing sports events, they are airing talk shows and news shows in which experts talk about them.

The sports channel’s upfront presentation also took a few shots at the “viewability” shortcomings that plague digital media. Tart-tongued ESPN commentator and comedian Kenny Mayne rose from the floor of the stage but then stopped rising when he was only halfway through and only visible from the waist up.

“This year, I’m going to talk about viewability,” he said. “This is me at 49%. … I stand here as a metaphor for the way consumers such as you receive something in its totality,” he said.

He was admonishing those who are satisfied with the way streaming video is disrupted and sometimes only partly viewable on digital platforms, while ESPN can offer 100% viewability at all times. It’s a selling point many of the cable and broadcast networks have taken up this upfront season.

ESPN’s presentation promised advertisers that it is committed to making a greater effort to measure its audiences, wherever and whenever they watch.

“It’s not enough to simply say we’re ubiquitous,” said Ed Ehrhardt, president of global sales and marketing. “That’s why we’re investing in measuring the unmeasured to give you more confidence – confidence in a world with viewability concerns and commercial clutter, confidence in delivering real effective impressions where your messages break through and they drive action. That’s ESPN, a place where advertising thrives,” he said.