With The End Of 'Mike & Molly,' TV Loses Melissa McCarthy To The Movies 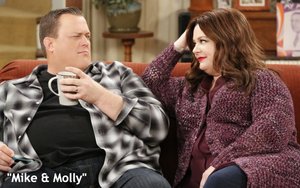 A nation sat transfixed Monday night -- in the grip of “Mike & Molly” fever -- as the beloved sitcom had its series finale on CBS.

Oh, wait a minute, that didn’t really happen. The show did end, but the part about the nation being transfixed? I made that up. The truth is, 8.45 million people watched the final episode of this comedy series about two overweight people who found love.

These days, 8.45 million is considered respectable for a network TV show in prime time. I can remember the days, however, when a TV show drawing that kind of an audience would have been canceled as soon as the numbers showed up the next morning.

Were you among the 8.45 million who tuned in to see what happened to Mike and Molly? Spoiler alert: In the show’s final scene, they told each other how much they loved each other. Aww. In the episode, they adopted a newborn baby just as Molly learned she was pregnant. So now, the formerly childless Mike and Molly will go into the future with two children, although none of us will get to see this happen because the show is over.

Why? Probably because Melissa McCarthy became such a big star during the years this show was on (2010 to this past Monday) that the world of network sitcoms could not contain her. Now she’s a movie star and considered to be one of the funniest women in America, if not the world.

The incredible thing is, if you ever watched “Mike & Molly,” you’d wonder if you were watching the same actress who was so funny in “Bridesmaids” (a pretty good movie) and other movies such as “Tammy,” “The Heat” and “Spy” (not such great movies, but she was great in them).

On “Mike & Molly,” she seemed restrained, as if the rigid sitcom formula that CBS adheres to was too restrictive to allow Melissa McCarthy to be unleashed.

So TV lost her to the movies, leaving some of us to wonder what might have happened if she’d stayed on TV and been allowed to blossom into a new Lucy. Once upon a time, a network like CBS would have been so eager to hold on to a talent like McCarthy that they would offer her anything -- her own sitcom with her name in the title perhaps, or maybe even her own self-titled variety show. Imagine that: Melissa McCarthy as a new Carol Burnett, singlehandedly bringing back variety and sketch comedy to prime time.

Maybe she will come back to TV someday. Plenty of people long associated with movies have found TV to be a fertile place for them to write and produce drama series and sitcoms without the restrictions that come with broadcast television. Maybe in a few years, McCarthy will create her own show -- for FX perhaps, since that network lets its creators do anything they want, whether or not it works (see the FX comedy “Baskets”).

I admit that this whole column is built mainly on speculation. For all I know, CBS did try to keep McCarthy on CBS. Maybe they offered her the moon and she said no because at this point in her career, making movies appeals to her more than making a sitcom.

As a TV fan, I hope someday Melissa McCarthy will come back to TV. And when she does, I hope she insists on calling the shots. And I hope she’s on some broadcast network, which is still the place where you can find the biggest audiences on TV (for the most part), even if a “big” audience these days is just 8.45 million.