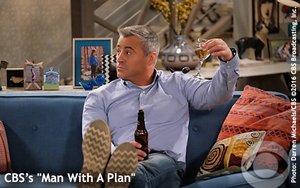 As it debuts six new shows for next season in the fall, CBS looks to take the overall crown for the current season in both total viewers and 18-49 viewers -- for the first time in a few years.

“This has been one of the most difficult scheduling years ever,” he said at an CBS upfront press breakfast.

What seems to be easier is national TV advertising. Good news comes from a TV scatter market that is still strong for advertisers, he says -- which, in turn, has historically meant decent upfront deal price increases.

“We see money coming back to the network,” Moonves said. Leaving aside digital media, he pointed to basic cable networks that still don't have enough scale, and witnessing many cable channels that are seeing declining ratings.

Moonves adds: “Even without football, we win.”

With regard to the fall programming season -- with more programming additions than in recent years -- Kelly Kahl, senior EVP president of CBS Primetime, maintains, “at CBS consistency is a good thing.”

Two comedies will eventually make their way into this fall on Monday night: “Kevin Can Wait,” starring Kevin James about a newly retired police officer looking forward to spending time with his wife and three kids, will start at 8:30 p.m. It will then move to 8 p.m. after “Thursday Night Football” ends, while “Big Bang Theory” moves back to its usual Thursday night time slot.

Also on Monday, “Man With A Plan,” a comedy starring Matt LeBlanc, goes at 8:30 p.m. It’s about a contractor who starts spending more time with his kids when his wife goes back to work.

After “Thursday Night Football” ends, new comedy “The Great Indoors” will start up at 8:30 p.m., starring Joel McHale as an adventure reporter who must adapt to the times when he becomes the desk-bound.

Later that night, new drama “Pure Genius” gets the Thursday night 10 p.m. time slot after NFL football goes away. It’s a medical drama about a young Silicon Valley tech executive who works with a veteran surgeon with a controversial past.

CBS is bringing back “MacGyver” on Friday starting at 8 p.m. “There aren’t a ton of demos on Friday night, but we get more than anybody,” says Kahl, who said CBS shows get an average 10 million viewers, more than anyone else.

“Elementary” moves to tough 10 p.m. Sunday time period. But Kahl says “it can weather the storm when things get tough” -- since it gets lots of delayed viewing.

Other midseason dramas are “Training Day,” a crime thriller that begins 15 years after the events of the feature film, and “Doubt,” with Katherine Heigl as an attorney at a boutique firm who starts to fall for her client.