Nobody Really Cared About Megyn Kelly's Sit-Down With Trump 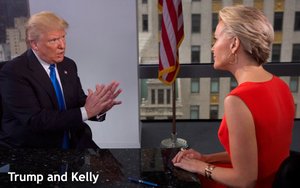 Sparks didn’t fly in the encounter between Megyn Kelly and Donald Trump that was seen on Fox Tuesday night.

It was the long-awaited sit-down of the two battling media personalities -- Kelly’s first interview with Trump since she angered him last summer at the first Republican debate when she raised the issue of his name-calling of women.

“You’ve called women you don’t like fat pigs, dogs, slobs and disgusting animals …,” Kelly said then, preparing to ask a question about his temperament. He answered: “Only Rosie O’Donnell!” Kelly then insisted it was more than just Rosie O’Donnell and the exchange continued.

Afterward, Trump evidently felt blindsided and he posted a few mean tweets about Kelly. Cut to the present day and the two are speaking again. After watching the interview, you can be excused for having this two-word reaction: Big deal.

Basically, the two made nice. Donald appeared in the easygoing, relaxed, confident guise he often adopts for one-on-one TV interviews. Gone was the angry Donald who became famous for his fiery stump speeches in which he nicknamed his opponents “Little Marco” (Rubio) and “Lyin’ Ted” (Cruz), and vowed to crush Isis and the Chinese.

Judging by the view of midtown Manhattan outside the windows of the conference room in which the interview was conducted, it was likely within the confines of Trump’s offices in Trump Tower on Fifth Avenue. Maybe Trump felt comfortable because he was enjoying this “home field” advantage.

Come to think of it, I wonder why they decided to do it there in the first place. Wouldn’t it have made more sense to do an interview like this in the environment of a TV studio? Fox News Channel is only a few blocks away.

Maybe that would have run counter to the “theme” -- if there was one -- of this hour-long special, which would mark Kelly’s debut on a Fox-owned network other than Fox News Channel.

On Fox (the regular TV network), she was being positioned as a new Barbara Walters, conducting interviews with celebrities in surroundings other than a TV studio. The Trump interview was the first segment. This was followed by interviews with Laverne Cox, the transgendered performer who is a cast member on “Orange is the New Black”; Robert Shapiro, one of O.J. Simpson’s defense attorneys who had not been interviewed about the Simpson case since the 1990s (according to Kelly); and actor Michael Douglas.

The interview with Cox aired a day after Fox announced at its upfront presentation on Monday that Cox would star in the network’s upcoming live telecast of “The Rocky Horror Picture Show” next fall. Thus, in her first time out as a Barbara Walters-type celebrity interviewer on a mainstream broadcast network, Kelly had to devote at least one of four interview segments shilling for the network.

Ever since it was announced, this special -- titled “Megyn Kelly Presents” -- has always felt like a tryout of some sort, as if the company is trying to learn if Kelly has legs (so to speak). She is a hot commodity and the scuttlebutt is that she will be courted by other networks when her contract expires in July 2017.

So while they still have her signed, Fox wants to see if she can do anything else from which the company might profit, besides hosting “The Kelly File” on FNC. Kelly probably feels the same way.

So, if “Megyn Kelly Presents” was some sort of audition for her fitness to move up to bigger and better things, then this particular tryout felt inconclusive.

To give it its due, the show drew a total audience of 4.8 million, which was twice the audience that watched two back-to-back episodes of “New Girl” a week earlier from 8 p.m. to 9 p.m. Still, you have to wonder why there wasn’t more interest in this interview.

What’s next for Megyn Kelly? She has no unsettled feuds with anyone else that I can think of, so if they give her another prime-time special, it will have to stand up all by itself without the potential for sparks, which didn’t fly anyway when she had her reunion with Donald Trump.

Maybe the reason nobody really cared was because regular people -- the kind of people who watch “The Voice,” for example, or “Dancing With the Stars” or “NCIS” on network television -- are just not interested in the feuds of media personalities from the worlds of politics and cable news.

Maybe Kelly should just stay in TV news where she can argue with pundits and occasionally spar with Donald Trump to her heart’s content. Meanwhile, the rest of us can watch “New Girl” and “Dancing With the Stars” in peace.