Shoppers Warming Up To Walmart 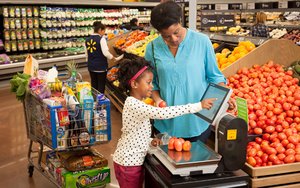 Wal-Mart Corp. surprised its critics, announcing that both quarterly sales and profits exceeded estimates, with gains driven by customers who seem to be cozying up to Walmart once again.

The Bentonville, Arkansas-based retailer says revenues increased 4% to $119.4 billion on a constant currency basis. And at its U.S. stores, comparable sales climbed 1%, while traffic increased 1.5%. (That marks the seventh quarter of gains.) Sales at its Neighborhood Markets, a format it has been building as a more direct challenge to conventional grocery stores, jumped 7.1%.

While deflation in food prices hurt sales, that was offset by strength in health and wellness, apparel, home and seasonal products. Hardlines also improved, helped by the addition of Auto Service Center managers, and a focus on basic tools. And while consumers till are not spending much in wireless, they were buying more TVs.

It also says its customer-experience scores are gaining, and that it is continuing its investments in e-commerce platforms.

The results were well above Wall Street’s expectations, “highlighting that customers are positively responding to improved store conditions and customer service,” writes Paul Trussell, an analyst who follows the company for Deutsche Bank, who says he was especially impressed with the traffic gains, and says it signals some real risks for Walmart’s competitors. The company says it intends to “initiate its next phase of U.S. price investment earlier than planned,” he notes, giving it the opportunity to gain even more favor with deal-hungry shoppers.

Walmart’s upbeat reports come amid a wash of bad news from retailers as diverse as Nordstrom, Macy’s, and JC Penney, and even Target is reporting a bit of a sales slowdown. Bon-Ton is the latest to add to the lamentations, with comparable-store sales dropping 2.9%. And its losses widened to $37.8 million,  compared with a net loss of $34.1 million in the same period last year.

"Ongoing headwinds in the retail environment, unfavorable weather, and a soft Easter all pressured our top line performance during the quarter,” says CEO Kathryn Bufano in its release. The company lowered its forecasts for the remainder of the year.