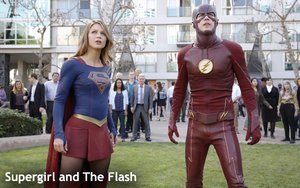 The CW positioned itself at its upfront presentation on Thursday as a network capable of offering advertisers an audience divided evenly between men and women.

At the center of this positioning was a new addition to its prime-time lineup that the network hopes will appeal equally to both sexes -- “Supergirl.”

The news that “Supergirl” would move from CBS to the CW next fall began making the rounds a day earlier when the super-heroine series was noticeably absent from CBS' programming plans for next season. The CW made it official at its upfront on Thursday.

“Supergirl’ belongs here,” said CW President Mark Pedowitz onstage at City Center in Manhattan. And he was right. “Supergirl” failed to achieve the ratings goals CBS set out for it in its first season airing Monday nights at 8 Eastern.

But on the CW, it joins a lineup already heavy with comic-book superheroes, including “The Flash,” “Arrow” and “Legends of Tomorrow.” And since the title character in “Supergirl” is a strong woman, she fits in with other female lead characters on CW shows, such as “Jane the Virgin” and “Crazy Ex-Girlfriend.”

"'Supergirl’ lands at the CW, but remains in its familiar time slot, Mondays at 8," Pedowitz said. “We expect the series to turbocharge the night, and boost the CW’s original superwoman, 'Jane the Virgin,' at 9,” he said.

The CW programs two hours of prime time five nights a week -- a total of 10 hours Monday through Friday. For next season, the network will have two new shows -- three if you count “Supergirl.”

The other two, announced Thursday, were “No Tomorrow,” a one-hour romantic comedy about a couple who decide to follow their dreams because they believe the world will end in a year; and “Frequency,” about a young woman who communicates with her long dead father via an old two-way radio she finds in a garage.

At its upfront, the CW positioned the new shows -- and the addition of “Supergirl” -- as fitting into its strategy to develop shows that attract both men and women. “When you look across our entire schedule, you will see we now essentially deliver a 50-50 split between women and men,” said Rob Tuck, EVP of network sales, in his opening remarks.

Throughout the presentation, CW execs strove to balance the network’s roots in broadcasting with its innovations in digital, where much of its younger audience is migrating.

“We have struck the balance of attracting both men and women to broadcast, while also connecting with the streaming-obsessed demo on our digital platforms where our median age is just 25,” Tuck said.

With many representatives of its affiliate stations sitting in the audience, the presentation repeatedly stressed the importance of broadcasting. “Next season will mark 10 years for the CW, and we have established ourselves as an innovative cross-platform hybrid network rooted in broadcasting with the ability to adapt and advance,” Pedowitz said.

“We put a strategy in motion to add more hours of original programming throughout the year [and] we have looked to fulfill our mission as a broadcaster with series that appeal to a wide range of demographics,” he said. “We are truly the first hybrid -- the best of broadcast and digital media.”

The CW also announced at its upfront that this fall, the CW app will be available “on every major OTT platform,” Pedowitz said. The move will “vastly expand our digital footprint to more than 80 million devices,” he said.

In-season CW series will be available through the CW app on the day after broadcast, and they will be free and advertiser-supported with no need for authentication through a local cable provider, Pedowitz said.

The CW upfront was the final event of the long presentation season, which started March 2 with Nickelodeon.
broadcast networks, tv, upfront
Next story loading