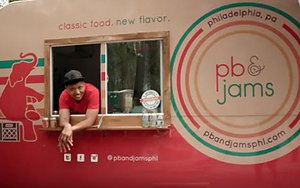 This March, the brand built on the concept by creating a $250,000 Triscuit Maker Fund on crowdfunding site Indiegogo to flash-fund more than 50 artisanal food makers.

Starting with a popular food truck that serves “the best darn PB&J you’ve ever had,” Gibson now produces six nut-butter varieties with Triscuit Maker Fund support, and is looking to ramp up production so that the jarred products can be sold in new locations and distributed to those in need through local charities.

The TV spot will be airing across ABC’s schedule, including late night; on NBC late night; and on Bravo, Food Network, HGTV, USA, Lifetime and Oxygen.

Triscuit will promote the ad and the YouTube-hosted two-minute version on its social channels.

A print ad will launch in InTouch and Star in their June 6 and June 13 issues, respectively, and appear in magazines including Real Simple, Martha Stewart Living, Entertainment Weekly, Bon Appetit and People during the remainder of June and through the third quarter.