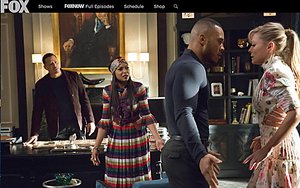 Fox Television Network and the Fox News Channel run the most commercials time per hour among the respective broadcast and cable network categories.

With results from iSpot.tv, the Fox Television Network averaged 15 minutes and 4 minutes in the first quarter of 2015 -- virtually flat (0.16% higher) versus the fourth-quarter period and the highest of all broadcast networks. These results include local TV ad time and exclude promotional time.

Fox News Channel was at 16:52 -- the most of any cable network (and all networks overall). It was down 3% from the previous quarter. Fox News has been posting soaring viewership due to the Presidential election news/campaigns.

Total broadcast advertising commercial time -- national and local advertising -- on networks was virtually flat in the first quarter versus the fourth quarter of 2015. The five top English-language networks inched up 0.7%, averaging 13 hours and 13 minutes, excluding any promotional time.

Although cable networks have announced efforts to cut back on advertising time, generally, they still have more commercial time than broadcast networks.