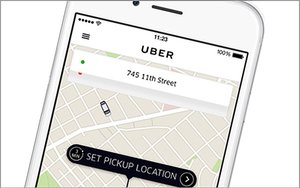 Thanks, in large part, to an explosion in smartphone use, a number of on-demand apps have transformed the U.S. service economy.

In fact, nearly three-quarters of U.S. consumers have used a shared, collaborative or on-demand online service, according to new findings from the Pew Research Center.

Specifically, Pew asked U.S. adults if they have used 11 unique services tied to the new digital economy, to which 72% respondents replied that they have tried at least one of them.

Overall, however, consumers still appear to be in the early adoption face with regard to ride-sharing services, and other apps. In fact, only about a fifth (21%) of U.S. adults have used four or more such services.

Not surprising, power users tend to skew younger, are college-educated and have higher household incomes. Still, nearly a third (28%) of U.S. adults have yet to try a single service-based app.

What apps are people using?

Meanwhile, 7% of this demographic report using ride-hailing apps on a daily or weekly basis, while just 3% of 30-to-49s -- and a mere 1% of adults ages 50+ -- do so. Urban dwellers are seven times as likely as rural residents to have used a ride-hailing app.

Separately, about one-fifth of U.S. adults (22%) have contributed to a “crowdfunding project online, while 3% report having created their own fundraising project.

About two-thirds (68%) of crowdfunding donors report have contributed to a project to help a person facing a hardship or financial challenge, while about 60% say they did so on behalf of an acquaintance, close friend or family member.

Also of note, consumers appear to have various views about the safety of “sharing economy” services. For one, 70% of those who use ride-hailing apps say that such services use drivers with whom they feel safe, yet female users are somewhat more likely to express concerns about driver safety.