Upfronts Were A Challenge For Big TV Companies With Many Networks 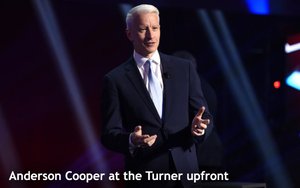 Maybe it’s because some TV companies try to cram too many of their properties into one upfront presentation that someone like Anderson Cooper -- a guy with a well-earned reputation for integrity -- ends up reciting a piece of upfront copy that seems beneath him.

It came during the Turner Networks upfront last Wednesday when CNN’s Cooper, onstage at the Theater at Madison Square Garden, was compelled by a TelePrompTer to shoehorn in a few throwaway lines about HLN, lest anyone in the audience forget that this network exists.

“I just want to say a word about our sister network HLN,” Cooper said suddenly. “We’re well on our way to a new HLN,” he declared, “one that capitalizes on franchises that have been proven successes, and tied more closely to the best storytelling on CNN.” What he meant here was never made clear.

“The hugely popular ‘Morning Express’ [HLN’s morning show] with my buddy, Robin Meade, who's here with us today, will be followed beginning this spring by a new show from Michaela Pereira that we're really excited about,” Cooper continued. “There's a lot happening at HLN so stay tuned for even more.”

He gave no more details about this Pereira show (basically a three-hour news block that will originate from Los Angeles starting at 10 a.m. Eastern time on weekday mornings) or anything else in the works at HLN whose lineup currently consists mostly of reruns of “Forensic Files,” an old (but very good) true-crime series. I reported on HLN’s incredible reliance on this show to fill 60% of its air time each week in a TV Blog back on April 21.

To aid me in my coverage of upfronts and NewFronts, I run a small digital recorder during them that allows me to go back later and transcribe portions of them. After Cooper delivered his breathless comments about “a lot happening at HLN,” I can be heard on my own recording saying aloud in an incredulous tone: “What?!” I remember thinking at the time: This might be the biggest whopper I’ve heard yet at one of these presentations, and that's saying a lot.

It's also difficult to say with any real accuracy. I covered 35 events on the ever-lengthening upfront and NewFront schedule, beginning with Nickelodeon back on March 2. So these “random thoughts” in this blog post are really that -- random -- because, really, who can remember everything?

But since everybody knows Anderson Cooper as the “keeping them honest” journalist, it seemed ill-considered on the part of Turner to assign him the task of reciting some hyperbolic promotional copy at its upfront that may or may not turn out to be true. A lot happening at HLN? That remains to be seen.

The brief inclusion of HLN in the presentation was likely part of Turner's effort to ensure that every network it owns gets mentioned, even if only in passing. Understandably, other Turner networks got far more attention than HLN, including TBS, TNT, CNN and TruTV.

Including every network they own – plus all of the digital platforms they manage too – in one presentation that ought not to exceed two hours is a challenge for some of the bigger TV companies. They are trying to put across the impression that their many properties give them a “reach” that should be attractive to advertisers.

No upfront this year provided a better illustration of this challenge than NBC Universal's presentation last Monday at Radio City Music Hall. Instead of staging an upfront devoted exclusively to its broadcast network, the company attempted to present all of its networks – broadcast and cable – in one event.

The aim was to promote itself as a company offering a wide-ranging “portfolio” of TV properties whose audiences can be accessed by advertisers across any or all of the company's platforms. But NBC has so many networks that it was impossible to include them all. Plus, the emphasis on “everything” resulted in the broadcast network being presented on a more or less equal footing as some of the company's cable networks such as E!, Bravo and Syfy.

Or, as one TV columnist put it last week – Robert Bianco of USA Today: “The most puzzling thing about NBC's presentation,” he wrote, “was the decision to make [NBC's broadcast network] share the stage with sibling cable networks, reducing new shows to the toxic-swamp level of E! and Bravo.”

Last year, NBC had an upfront just for the broadcast network, and another one that encompassed all of its cable networks. I wonder what the company will do next year.

tv, upfront
1 comment about "Upfronts Were A Challenge For Big TV Companies With Many Networks".
Check to receive email when comments are posted.
Next story loading