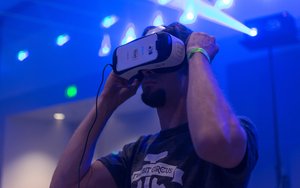 Virtual reality and augmented reality differ by the degree of real-life pictures used in the creation of the experience. Augmented reality developers can include a blending of real-life and virtual images, allowing consumers to interact with the two and distinguish virtual from real life. Virtual reality leaves the real world behind and immerses the consumer into a completely virtual world and experience.

Adobe currently only supports virtual reality viewing on Samsung Gear and Google Cardboard devices, but has announced intentions to soon support both Oculus Rift and HTC Vive as well.

Virtual reality hardware is predicted to reach $2 billion in sales by the end of the year, according to a recent IDC forecast. The market intelligence company asserts that total unit sales will hover below 10 million in 2016, but are expected to jump past 110 million units in 2020.

Parreira says that the growth of video in marketing acts as a predecessor to virtual immersive experiences, and predicts that VR will be popular among marketers, publishers, Hollywood and live events, such as music concerts or athletic competitions.

“Video bleeds into VR, it’s that simple,” he says.