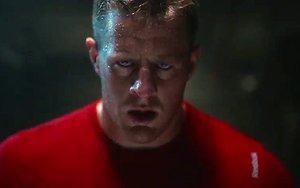 Reebok has unveiled its new J.J. Watt platform, and is hoping to use the football great’s prowess not just to show off the Houston Texans’ athletic skills, but to make all Reebok fans feel a little more human.

“There are a lot of people out there interested and excited about functional training, and doing it in neat ways,” says David Oksman, head of U.S. marketing for Reebok. “Because of how hard J.J. Watt works, we felt like this is a perfect time to introduce this. It’s a way for us to step beyond things like Spartan Races and CrossFit. It adds another level of reach for us.”

The first video installment of the “Hunt Greatness” campaign is called The Prologue, and already running. Oksman tells Marketing Daily that this video, created by Iris, will be followed by others over the summer. These big-deal videos, he says, “will just be the tentpoles for the campaign. We’ll also be adding more snack-able content. But when it really gets exciting is when the consumer participates, and then we just become a curator for our community. We’ll be developing a holistic platform.”

The effort, an add-on “Be More Human” campaign currently running for Reebok, is based on the idea that we’re all on the hunt for our best selves. “He is such a great role model, and known for being so hard-working, that we couldn’t think of a greater person to represent our brand purpose.”

He says that it is not so much Watt's skills or his size (he’s 6’ 5”, 290 pounds), but his persistence and determination that appeals to people. “Everyone defines their own level of greatness,” he says. The idea for the approach for the new line came about last year, with a video from Watt showing how he finally landed a 61-inch-box jump, breaking his own record.

Reebok, based in Canton, Mass., is owned by Adidas. Earlier this month, the German company says that Reebok sales gained 6% in the first quarter of its fiscal year, on a currency-neutral basis, making gains in all segments.