Hundreds Of 'Mad Men' Props Up For Grabs In Online Auction 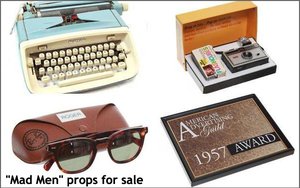 How much would you bid for a brown-paper A&P shopping bag from the 1960s filled with groceries from the era?

It’s a question you may have never pondered before, but now an opportunity to ponder it has arrived with the announcement that more than 1,500 items from the set of “Mad Men” will be offered in an online auction starting next Wednesday, June 1.

The auction -- announced Monday -- will be conducted by an outfit called Screenbid. The auction runs until June 15, but the announcement said bidding on many items will end on June 13, to make it possible to ship them in plenty of time for them to arrive before Father’s Day, which is Sunday, June 19.

A Father’s Day tie-in is an intriguing approach to take for the timing of this sale, since the main character in “Mad Men” -- Don Draper -- was not exactly in the running for Father of the Year.

But the organizers must feel that at least some of the items up for bid might make fine gifts for Father’s Day. The possibilities are wide-ranging.

Depending on your budget -- and your love for Dad -- you can bid on Don Draper’s bright red 1964 Chrysler Imperial Crown convertible (said to be a very rare and very collectible car) or you could go for something less grandiose such as a pair of Roger Sterling’s Ray-Bans (one of the items pictured above).

There is at least one pair of Don’s Ray-Bans up for auction too, according to the “Mad Men” auction page on Screenbid.com.

The props for sale are nothing if not eclectic. They include the other items pictured above: A light blue Royal typewriter owned by Peggy Olsen, Sally Draper’s Kodak Instamatic camera (with box and accessories), an advertising award plaque from Don Draper’s office, and much more.

For example, the aforementioned A&P bag full of groceries is billed as “Trudy Campbell’s A&P groceries” (lot no. MMii-6177). Trudy -- wife of the devious Pete Campbell -- was seen carrying this bag into their kitchen in a single scene of the show.

Authenticity was apparently so important to this show that the bag’s contents were vintage products in their original packaging that may or may not have been taken out of the bag and then seen on the show. The products include Dainty cake flour, Elhers pure lemon extract, Morton Salt and Calumet baking powder.

There are various lamps (table, floor and desk) and numerous examples of mid-century furniture. You can bid on an ice bucket owned by Joan Harris, a standing ashtray from Bert Cooper’s office and Ken Cosgrove’s monogrammed lighter. I don’t remember seeing him smoke (which was unusual for “Mad Men”). Maybe he kept it handy to offer clients a light.

The Screenbid “Mad Men” auction has been curated by Ellen Freund, who served as property master on the show. “Every item that appeared on ‘Mad Men’ was chosen with painstaking care to be both historically accurate for the time period and to help tell the characters’ stories through the objects around them,” Freund said in a prepared statement. “With this auction, it’s exciting to give fans a chance to take home a piece of American and television history.”

When considering some of the items, however, it’s difficult to comprehend why anyone would bid on them. One example would be a legal pad used by copywriter Stan Rizzo to make notes. Another might be a set of yellow bedsheets and pillow cases that were on the bed in which Don, wife Megan, and a girlfriend of Megan’s had sex. I know they didn’t really do it, but this set of linens seems icky anyway. Maybe they’ll go cheap.

Some (if not many) of the items were part of last year’s exhibition of “Mad Men” objects, costumes and sets that was shown at New York’s Museum of the Moving Image to coincide with the final seven episodes of the show. The auction press release noted that it’s been a year since “Mad Men” had its finale on May 17, 2015.