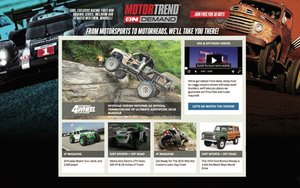 Motor Trend OnDemand is re-launching -- this time at full throttle. Motor Trend’s subscription video on demand service has added more content from big racing events like the Indy 500 and Formula 1, available to watch on a new mobile app.

The 15- and 30-second video units run May 24 through Father’s Day, across all the digital video platforms, such as YouTube, Facebook, Instagram, programmatic and targeted automotive enthusiast cable networks.

The ads feature some of Motor Trend’s original programming -- like the popular Web series “Roadkill” -- as well as live automotive racing series including F1 and Indy.

The digital and social executions consist of home page takeovers on many of TEN’s Web sites and purchased media, as well as Instagram video carousels, programmatic, search and direct-to-download campaigns.

The print executions will be available in the June issues of roughly 30 of TEN’s enthusiast publications, including Motor Trend, Hot Rod, Automobile, Lowrider, Truckin and Muscle Car Review.

All ad units tout a “Join free for 30 days” promotion, as well as special promotional monthly and yearly subscriber prices.

TEN’s CMO Jonathan Anastas stated, “We wanted gearheads to know, ‘Can’t go to see F1 in Monaco? Can’t hit the track in the latest Supercar? Motor Trend OnDemand can take you there, 24/7/365 on the device of your choice.’”

Motor Trend originally launched its OnDemand subscription video service last August but it was only available on desktop and tablet devices. The app resembles a Netflix for motorheads, featuring sections like “New,” “Watch Live,” “Motorsport,” “Originals,” “Events” and “Vault,” with videos that scroll horizontally.

“This model is familiar to users,” Anastas told Publishers Daily.

The coolest part for gearheads will likely be “Live Events;" Motor Trend OnDemand is planning to host over 150 live races this year including the Pirelli World Challenge and DTM Championship.

Anastas told PD that the initial launch of Motor Trend’s OnDemand service was in many ways a beta version, but this is their “hard launch.”

Anastas said one of the goals of the app is to convert some of Motor Trend’s 4 million YouTube subscribers to SVOD subscribers. The categories in the OnDemand app were tested on consumers to find what resonated best.

A daily round-up show is also in the works to go under the “Originals” category, a “John Oliver show for gearheads,” he said.

The content is ad-free -- except for the occasional integrated content, like a “Sponsored by” tag and a Dodge logo in a “Roadkill” episode featuring a Dodge car.

The service is also the exclusive distributor in North America for over 60 live events, including racing from Pirelli World Challenge, MotoAmerica, the Blancpain Series and Lamborghini Super Trofeo, as well as popular enthusiast events, like the Pebble Beach Concours d'Elegance.