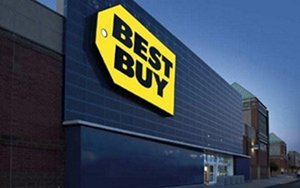 Consumers’ healthy appetite for wearables, appliances and home theater helped Best Buy beat the retail blues this quarter. The Minneapolis-based chain, which had been forecasting a decline in same-store sales, says revenues and profits both improved.

In the U.S., same-store sales came in flat, as opposed to the expected 2% decline, “driven by strong year-over-year sales growth in health and wearables, home theater and appliances offset by continued softness in mobile phones and tablets,” says CEO Hubert Joly, in its release. “Contributing to these better-than-expected results was the strong performance in our online channel, which grew 24% in the quarter.”

Since the first quarter has little impact on full-year results, at about 15% of total annual sales, the retailer isn’t raising its forecast. But it says it will continue to do what it can to strengthen multichannel offerings, cut costs and find points of difference. “We are investing to make it easy for customers to learn about and enjoy the latest technology as they pursue their passions and take care of what is important to them in their lives,” he says.

Wearables are flying off shelves all over, with the NPD Group reporting earlier this month that dollar sales climbed 40% in the first quarter of the year, with unit sales rising 27%. (Fitbit remains the No. 1 brand in connected digital fitness devices, with 81% of U.S. market dollar sales. It says 16% of the adult population now has a device, up from 11% in the same period last year. It expects that number to climb to 19%, or 41 million devices, by the end of this year.

But for Best Buy, which also announced a transition plan for its CFO, there’s still plenty of bad news in mobile phones, tablets, computers and gaming, as well as services. In fact, Citigroup downgraded the company from a “buy” to “neutral,” citing the tough retail climate, as well as the lack of any meaningful new product launches ahead.

And Deutsche Bank also cut its rating, citing the looming leadership transition, a dependence on sales gains predicted for later this year that may not materialize, and a decreased ability to cut costs. “Each of these are significant factors,” it says, “but we believe the management team transition is at the forefront and may make it difficult … until a new track record is established.”