IAB, New York Times, Others Back Gannett In Privacy Battle 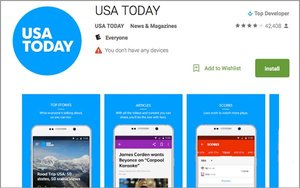 The Interactive Advertising Bureau, The New York Times Company, Huffington Post and other media and advertising organizations are supporting Gannett in its privacy battle with a mobile user over the USA Today app.

The outside organizations are asking the 1st Circuit Court of Appeals to reconsider its recent ruling that Gannett may have violated a federal video privacy law by allegedly transmitting information about Android users to Adobe.

"The distribution of free and low-cost video content is threatened by the panel’s decision," the IAB and others argue in a friend-of-the-court brief. On Monday, the 1st Circuit agreed to allow the organizations to weigh in on the case.

The battle dates to 2014, when Massachusetts resident Alexander Yershov alleged that Gannett's USA Today app violated the Video Privacy Protection Act by sharing information about him, including his device identifier, geolocation data and video viewing history, with Adobe.

Gannett argued that the case should be dismissed at an early stage for several reasons. The company contended that Android device identifiers -- a string of numbers unique to each device -- are not personally identifiable information. The company also says people who download a free app aren't "subscribers."

A trial judge dismissed the case, but a three-judge panel of the 1st Circuit unanimously revived the potential class-action lawsuit. The appellate judges said in the ruling that device identifiers combined with geolocation data could be personally identifiable.

Earlier this month, Gannett asked the court to reconsider its ruling.

The IAB, New York Times and other Gannett supporters are backing its request, arguing that the ruling marks an "unwarranted and unprecedented expansion" of the Video Privacy Protection Act. They add that the decision "risks exposing companies to broad class action liability for routine digital transactions that are essential to online content distribution."

"American consumers today enjoy access to a vast and diverse array of free or low-cost digital content from content providers big and small, established and new, precisely because their non-personal data can be analyzed and then used to provide them with advertising and content that is better suited to their interests," the companies argue.

The IAB, New York Times and others also contend that the law was aimed at preventing public embarrassment, and not the kinds of behind-the-scenes data transfers at the heart of the battle over Gannett's app. Lawmakers passed the Video Privacy Protection Act in 1988, after a newspaper obtained and published the video rental records of Supreme Court nominee Robert Bork.

"Scores of companies contract with service providers to analyze anonymous data about their users, often sharing some sort of numerical user or device identifier to facilitate that analysis," the groups write. "The analytics provider here is not provided with the name of the user, or with other information that is typically considered personal information, and certainly has no incentive to determine (let alone publish) that identity. Congress could never have anticipated in 1988 that the VPPA would be violated by such an exchange."