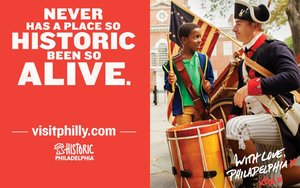 Philadelphia is launching a $2 million campaign that promotes all there is to see and do in the historic areas of the city.

The effort, which broke during Memorial Day weekend, includes a new logo and creative advertising. It aims to redefine and rename the city’s oldest area, now dubbed Historic Philadelphia. The campaign runs through 2017, when the new Museum of the American Revolution opens.

While the marketing effort touts the area’s powerful place in the country’s founding, it also showcases the restaurants, bars, shops, galleries and attractions that make it appealing to current residents and visitors.

The media buy includes outdoor, online and radio placements. Nine Visit Philly channels (with one million fans and followers) are distributing original and user-generated history-themed content and engage with fans through organic and paid measures. All social efforts encourage the use of the #historicphilly hashtag as a way to identify traffic online and direct traffic on the ground in real-time.

The new logo features a custom-illustrated Liberty Bell that exhibits a playful quality, along with the words Historic Philadelphia in a hand-drawn typeface, displaying youthfulness and energy. The colors were chosen as a fresh and modern alternative to the traditional red, white and blue commonly associated with U.S. history.

In 2015, 4.3 million people visited Independence National Historical Park and spent $247 million, according to the National Park Service, but a study by Drexel University students in 2014 revealed that the majority limited their visits to the Liberty Bell Center, Independence Hall and the Independence Visitor Center.

“We want to change this pattern,” said Rosalind Remer, vice provost and Lenfest executive director for the Center for Cultural Partnerships, in a release. “This campaign encourages people to explore and appreciate the hidden jewels that Historic Philadelphia has to offer.”