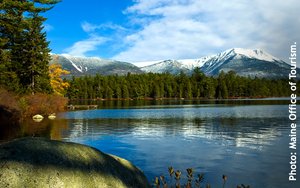 The summer tourism kickoff is always a big deal in Maine, which lures millions each year to its lighthouses, lobster shacks, and rocky coast. But this year, it has taken on more meaning, with the potential of a new national park dangling over the blueberry-dappled landscape.

What’s at play is a controversial 87,500-acre parcel of land just east of Maine’s Baxter State Park, home to the spectacular Mt. Katahdin and the beginning (or end) of the Appalachian Trail. Hopes are high that the gift of the land owned by conservationist Roxanne Quimby, founder of Burt’s Bees, would earn the North Woods region “national monument” status, often a precursor to becoming a national park. Ultimately, planners envision a park with 150,000 acres, funded by the $40 million Quimby endowment.

Most people favor the plan, which proponents say would bring jobs to the Katahdin region, decimated by the closure of all its paper mills. With monument status, “we would look forward to increased visitors to our region, and more ways for them to spend money,” says Gail Fanjoy, president of the Katahdin Area Chamber of Commerce. (Its board is unanimously in support of the monument.). “And we think once people see the area, they'll love it. They will want to move here and start building our population again.”

While statewide polls suggest about 67% of residents favor the park, there is opposition, especially among small pockets of locals who say they would prefer to see more forestry jobs, fear restrictions on snowmobiles and ATVs, or are wary of federal oversight in general. (That includes Maine Gov. Paul LePage, who opposes the monument.)

Maine is already home to Acadia National Park, one of the busiest in the country, which attracted 2.81 million visitors last summer. If the North Woods could attract even a fraction of those visitors, supporters say, it would be a tourism win.

“Unless and until there is a national designation, the area will remain largely a secret to the great masses of people,” Fanjoy tells Marketing Daily. “But nationally designated land? People will seek that out.”

The controversy has already stirred up interest in the region, she says, and she is expecting a strong summer. And overall, Maine is expecting much as 30% increase in visits in some places, including Bar Harbor with Acadia's centennial celebration this year, says the Maine Office of Tourism.

It’s also hoping to build on its strong 2015 “first timers” visitation, which was up 43%, primarily from the Mid-Atlantic region. “And these first-time visitors are more likely to be primarily visiting the Maine Highlands, the Maine Lakes & Mountains region, and Aroostook County,” it says.