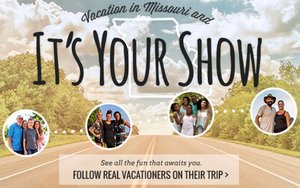 In keeping with its proud identity as “the Show-Me State,” Missouri had visitors document their own experiences for its latest tourism campaign, dubbed “It’s Your Show.”

St. Louis-based H&L Partners, the state’s longtime marketing agency, chose six groups of visitors from nearby cities, armed them with GoPros and iPhones, and had them capture footage of their vacation adventures.

Selected for their varying interests in order to showcase a wide range of the state’s attractions, the tourist groups included families from Chicago and Omaha, an “outdoorsy” engaged couple from Memphis, mature road-trippers from Little Rock, a trio of young adult girlfriends from Nashville, and three male buddies from Tulsa.

The footage was used to create a virtual video trip presentation for each group, featuring “snackable” vignettes of key activities, hosted on a new campaign microsite (an extension of the main tourism site, VisitMO.com).

The videos (see preview trailer below, on Missouri tourism’s YouTube channel) and photos are accompanied by interactive, 3-D maps showing each group’s routes and stops along the way. The microsite also offers reviews and ratings.

Instead of “typical beauty shots of Missouri’s greatest hits,” the agency and client opted for a “fresh” approach that “takes tourism word-of-mouth to the next level,” summed up H&L executive creative director Mark Manion.

The concept struck all concerned as an authentic, novel and compelling way of reinforcing the state’s variety message, and that sense was confirmed by focus-group testing, says Lennon. The team believes that this is the first time a state tourism campaign has used tourist-generated content in mainstream media, he notes.

“It’s Your Show,” which kicked off in March, succeeds and “evolves” a highly successful campaign called “Enjoy the Show,” which ran for three years starting in 2013.

The earlier campaign “was designed to have a cinematic feel in order to show the grandeur of the state,” says Lennon. “As we’ve seen digital media evolve in just a few short years, and with the prevalence of user-generated content on sites such as YouTube and applications such as Instagram, it really made sense for this to be our next step.”

“Enjoy the Show” achieved 65% awareness among the target audience (a record high), and year-over-year increases in ROI, Lennon reports. The state’s annual advertising and media effectiveness study showed the 2015 campaign-year efforts having generated 2.1 million incremental visits and about $2.1 billion in incremental visitor spending over the previous year. Missouri businesses realized $91 in visitor expenditures for every $1 invested in the tourism division’s budget, up about 5.8% over the previous year.

During fiscal year 2015 (July 2014 through June 2015), the state had 40.4 million leisure and business visitors, up from 39.2 million the previous year. The tourism division is charged with the leisure market, estimated to account for about 82% of visitation.

The new campaign was produced over two fiscal years on a budget of about $500,000, which included all production costs for six individual shoots and the creative elements and editing costs for TV spots, online videos, web site development and other creative.

In addition to social media and public relations efforts, it includes out-of-home and print ads, with creative that aligns with the digital creative by featuring real people enjoying activities in Missouri.

Print media buys focus on the core target audience of female travel decision-makers 25 to 54. Midwest Living, Better Homes and Gardens, Family Circle and Southern Living are among the vehicles being used.

A large wall-scape in the downtown area of Columbus, Ohio, a relatively new market for Missouri tourism, is among this campaign’s format and media innovations.

While it’s too early to provide meaningful statistics, Lennon says that the new campaign’s preliminary results are positive.

The state has recognized the success of recent years’ efforts by significantly increasing the tourism budget. Investment jumped by a whopping 46%, from $12.9 million to $18.8 million, between fiscal 2014 and 2015, to $25.4 million for fiscal 2016, and to $28.4 million for the year starting this July.