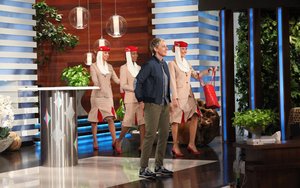 Emirates Airline is kicking off the summer travel season by urging Americans to take every day of vacation they have coming to them.

To that end, it has launched “The Big Takeoff,” an integrated campaign based on the insight that on average, Americans leave eight vacation days unused.

To get the ball rolling, Emirates got Ellen DeGeneres (shown at left) to hold a competition on her show. An audience member from the May 23 episode won a luxury trip to Cape Town, South Africa, with a two-night stopover in Dubai, staying in One&Only resorts. In September, the talk show will feature a Big Takeoff journey.

There is also a social media sweepstakes to open up the chance for consumers to experience an all-expenses-paid Big Takeoff of their own, as well as a companion fare sale, offering travel for two at special discounted rates.

The winner will enjoy gourmet dining, over 2,500 channels of on-demand entertainment on Emirates’ ice entertainment system, complimentary wines and spirits, and award-winning service. Upon arrival, they will experience marhaba, Emirates’ premium meet-and-greet airport service, before they head off to their hotel at the One&Only Royal Mirage. The winner will also experience a private Sundowner Dune Dinner Safari and City Tour, compliments of Arabian Adventures.

The winner’s office will also receive the Emirates treatment. Colleagues will experience a day of regionally inspired Emirates cuisine prepared by a personal chef, an after-work bartender mixing Emirates’ bespoke onboard cocktails, and a private screening of a film from Emirates’ inflight entertainment system. Consumers can enter for a chance to win at www.emiratesbigtakeoff.com.

In conjunction with the launch of The Big Takeoff, Emirates is offering new Economy Class companion fares for flights originating in the United States to select international destinations across its global network, including Milan, Dubai, and Mauritius, among other destinations, starting at $999.