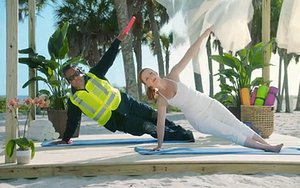 With television sets ablaze with images of long security lines at the nation’s airports, Airlines for America (A4A), the trade association representing the leading U.S. airlines, has launched its newest ad campaign.

“We Connect the World” reminds flyers and policymakers of the benefits that only the airline industry can offer, says A4A in a release.

The ads feature James Pepe, a ramp marshaller who works the tarmac at Los Angeles International Airport for United Airlines. This is the second year that Pepe has appeared in the ads. His image is also used in digital, social and out-of-home placements.

The advertising appears in the Washington, D.C. media market on television, cable, digital and print publications and various out-of-home venues including Nationals Park and the Ronald Reagan Washington National Airport. It is supported by http://airlines.org/weconnecttheworld/.

Pepe personifies the airline industry and enables flyers to reach important destinations. One television ad depicts the marshaller helping a daydreaming professional escape her boring, everyday life for the beach vacation of her dreams. Another whisks a businesswoman to an important meeting across the country so she can make the personal connection that will secure a new contract — and bring her safely home to her family.

The ads convey important reminders about the scale and magnitude of the airline industry that enable it to drive 5% of America’s economy. In a single day, U.S. airlines:

The campaign is in its second year and was created by Subject Matter, a Washington, D.C. based communications, strategy and advertising agency.