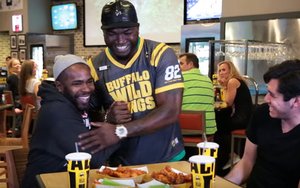 Red Sox star David Ortiz, aka “Big Papi,” has been the scourge of New York Yankees’ fans since he joined the Sox in 2003.

To generate social buzz among the sports lovers who are the restaurant chains’ core customers, Buffalo Wild Wings recruited Ortiz to play a prank on some diehard Yankees fans.

B-Dubs’ marketing team brought several of those fans together at a B-Dubs restaurant in the heart of Yankees territory, the Bronx, telling them that they would be interviewed for a video about New York baseball.

In reality, the point was to elicit their frank comments about the Red Sox and Ortiz in particular, have Ortiz surreptitiously listen from a back room, and then come out (dressed as a waiter) to surprise them.

The result is a three-minute video, called “Rivals,” that was posted today on B-Dubs’ YouTube channel, and is also being promoted on its other social channels. Ortiz clearly gets a huge kick out of hearing Yankees fans spontaneously complaining about how much he has hurt their team over the years, and how they are glad he’s retiring after the 2016 season.

The video is the latest in the brand’s #BDubsAliveEvents series showing sports stars surprising fans at B-Dubs restaurants.