We’ve been hearing the death knell for acculturation for the past several years now in the Hispanic marketing world. A large percentage of Fortune 1000 companies, however, still use acculturation as a point of reference for segmentation so as a research company we still see acculturation models regularly.
However, a call with an ad agency last week made us do a double take and question, is acculturation really dead? We were discussing a research strategy and mentioned segmenting by acculturation for research purposes and we were stopped dead in our tracks by the statement, “Let me stop you there. All Hispanics are bicultural. All Hispanics speak English. Acculturation is an outdated concept.” We’ve had discussions about the merits of certain models with agencies in the past, but to proclaim that acculturation is completely dead, all Hispanics are bicultural and all Hispanics speak English made us take a closer look at this concept since it seems to have reached critical mass.

Before we dive into the question of acculturation being relevant or not, let’s quickly discuss what acculturation is. In short, acculturation is a way of segmenting U.S. Hispanics, Asians and other immigrants beyond language usage. There are many acculturation models but at the crux of each of them are the following components:

Answers to the questions are run through an algorithm and respondents are typically segmented into the following three groups:

The overarching idea is that as an individual spends more time in the United States, the more acculturated they become, moving up the acculturation spectrum.

The main arguments against usage of an acculturation model is that it is dated as it was primarily used during the Hispanic immigration boom of the ’90s and is no longer applicable as current Hispanic population growth is being driven by U.S. births. Furthermore, the algorithm assumes a linear progression through the acculturation spectrum and does not account for retro-acculturation and non-linear adoption of home culture beliefs and practices.

Digging deeper into the point of immigration we see some truth to this idea if we look at the following chart outlining the sources of Hispanic population: 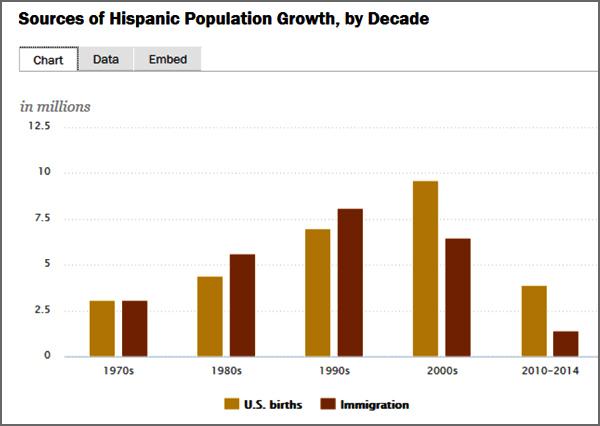 The ’80s and ’90s reflect the large influx of Hispanic immigration and the ’00s reflect the boom in U.S. Hispanic births and a slowing in immigration. The ’10s so far are showing a similar path. However, stepping back and looking at the hard numbers, immigration still accounted for 6.5 million new Hispanics in the ’00’s, over 40% of the Hispanic population growth.

Record Number of Immigrants in U.S.

While the acculturation model may be dated for most U.S.-born Hispanics, it is very much applicable to the 6.5 million Hispanic immigrants that came in the ’00s and the 1.4 million Hispanics who have so far immigrated in the ’10s.

Looking beyond U.S. Hispanics, there were a record 42.2 million immigrants living in the U.S. in 2014, making up 13.2% of the nation’s population. This represents a fourfold increase since 1960, when only 9.7 million immigrants lived in the U.S., accounting for just 5.4% of the total U.S. population. Furthermore, there has been a dramatic shift in the region of origin among the immigrant population residing in the U.S. since the passage of the 1965 Immigration and Naturalization Act. The percentage of immigrants from Europe and Canada dropped to 13.6% of the total, while Mexican immigration increased to 27.7%, Asians jumped to 26.4% and other Latin Americans stood at 23.9% with 8.3% born in other regions.

Asians are currently driving immigration in the U.S. and the foundational elements of the acculturation model are still valuable to brands and companies looking to understand the foreign-born vs. U.S.-born Asian population as this is a group that many companies are looking to as a growth segment.

4 comments about "Is Acculturation Really Dead?".
Check to receive email when comments are posted.
Read more comments >
Next story loading