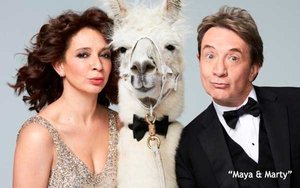 For heaven’s sake, please don’t bring back the variety show.

The idea of a prime-time variety show revival comes up every once in a while whenever someone new comes along with a show that looks as if it will try and do just that -- bring back a form of television that was once a prime-time staple, but long ago went the way of Westerns and “Captain Kangaroo.”

This is what “Maya & Marty” -- starring Maya Rudolph and Martin Short, seen in the photo nearby with a llama (center) -- seems poised to attempt. This show, premiering Tuesday night at 10 Eastern on NBC, is being positioned as just that: A variety show. “The Maya & Marty Goodtime Hour,” anyone?

NBC's p.r. department is promoting the show with the usual breathless hyperbole. The show is “highly anticipated,” says some of the p.r. copy on the network's media Web site. Rudolph and Short are “two of the biggest icons in [“Saturday Night Live”] history,” “beloved by audiences of all ages,” a “dynamic duo ready to unleash the full range of their talents and bring down the house like never before,” the copy says. Oy.

Request for present and future generations writing about “popular culture”: Can we please retire the overuse of the word “icon” to describe, well, just about everybody these days?

Meanwhile, NBC is introducing this “highly anticipated” new variety series in one of the deadest periods of the year -- the onset of summer. It will follow the two-hour season premiere of “America’s Got Talent.” To give the NBC schedulers their due, “Maya & Marty” does seem more or less compatible with the network’s summer talent show.

Or maybe not. It was just last fall that the network tried a similar show in the same time period -- Tuesday nights at 10 (following “The Voice”) -- that was supposed to usher in the new era of variety on TV. The show -- “The Best Time Ever with Neil Patrick Harris” -- had its planned eight episodes and then was never seen again. So much for last year’s variety-show revival.

Here in summer 2016, just about the only person I've noticed anticipating “Maya & Marty” highly has been Jimmy Fallon, who mentioned it last week on “The Tonight Show” because it’s being taped at 30 Rock in New York in a studio near to his own.

Fallon, that late-night comedy icon, is due to make an appearance on the premiere episode of “Maya & Marty” along with fellow beloved icons such as Larry David, Tom Hanks and Miley Cyrus.

Certainly, it is the job of the promotion and publicity team at NBC to make the most of any show NBC invests its money in. And anyone else highly anticipating the arrival of “Maya & Marty” is free to gaze skyward and thank heaven for this show and all that it might portend for the future of variety shows on television.

But here's the point of this blog (finally): TV variety shows are the kinds of TV shows that people remember fondly -- but usually through the rose-colored glasses of nostalgia. A real hard look at the variety-show era people remember most, however -- basically the 1960s and ’70s -- reveals a lot of cheesy dreck.

The gold standard of variety television for most people is “The Carol Burnett Show,” which ran on CBS from 1967 to 1978. It is perhaps best remembered for the seasons it aired Saturday nights at 10 (1973-78) when it represented the grand finale of a lineup of legendary sitcoms such as “All in the Family,” “The Mary Tyler Moore Show” and “Bob Newhart.”

I can go along with most people's recollections that the “Burnett” show was not cheesy dreck, at least not all the time. But so much else was. When I was a precocious youngster, for example, even I couldn't accept the “Honeymooners” sketches they used to do on “The Jackie Gleason Show” when it originated from Miami Beach and Ralph Kramden (Gleason) had a perpetual south Florida tan from playing golf every day. What’s next on “Maya & Marty” -- the June Taylor dancers?

There are people, apparently, who remember fondly such shows as “The Sonny & Cher Comedy Hour” and “Donny & Marie.” And I suspect many people remember them warmly precisely because of their cheesier aspects.

Such variety shows with their “Goodtime Hour” titles (such as “The Glen Campbell Goodtime Hour”) are celebrated for this today -- lumped in with others such as “Pink Lady and Jeff,” which aired for only five weeks on NBC in 1980, but is still widely remembered. Such was the power of TV -- any TV -- in the era of just three networks.

NBC provided no episode for preview of “Maya & Marty” because it is being taped close to its air date. I suspect Rudolph and Short will do a variety show that is more of a spoof of a variety show than the real thing.

The summer season on network TV has become a period for experimentation. So let this variety-show experiment proceed. Maybe they can get Pink Lady to appear next week.