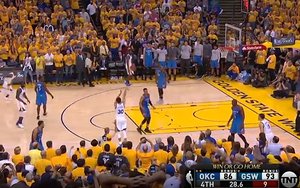 Through 42 playoff games this year, TNT averaged 4.7 million viewers -- up 12% versus a year ago.

The seventh and deciding game of the Western Conference finals between the Golden State Warriors and the Oklahoma Thunder earned a massive Nielsen 16 million average total viewers -- the highest NBA game ever on cable TV and the best overall rating ever for a program on TNT.

Starting Thursday, ABC will again air the NBA Finals series. The Golden State Warriors do battle with Cleveland Cavaliers -- a repeat of the series a year ago where the Warriors won in six games.