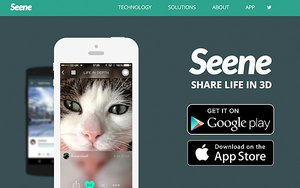 Photosharing app Snapchat reportedly acquired Seene, a company that has developed technology that allows users to take 3D pictures. The acquisition is apparently one focused on Seene’s engineering team and technology than its product. The news was reported in TechCrunch.

Seene is able to turn photos into 3D objects using a smartphone’s camera within the phone itself without having to rely on a cloud-based backend or special infrared sensors.

Users are able to move the photo around by tilting their phones or swiping it.

The tech will most likely be used for a new 3D selfie lens, but it has been speculated that the company may use it to develop a VR offering. Social media will most likely become a major channel for the creation of VR content if users embrace the format.

Advertisers will also benefit from the new tech, as it will allow them to develop new ways of incorporating brands into photos with three dimensions.

Whether Snapchat does develop something with VR, 3D photos will be a boon to the company’s burgeoning advertising business.

Most, but not all, of Seene’s team is being relocated to Los Angeles from London.

Snapchat has recently surpassed Twitter in terms of daily active users, with 150 million to Twitter’s 140 million, as well as securing a $17 billion valuation. Despite that success, the company still needs to determine its finances, though this acquisition points toward more possibilities for monetization.