The Association of National Advertisers this morning released findings of an extensive probe into the “transparency,” or lack thereof, of agency media-buying practices and said it found the practice of kickbacks or non-transparent media rebates to agencies to be “pervasive.”

The findings, which are the result of an eight-month study conducted by K2 Intelligence, found “evidence of a fundamental disconnect in the advertising industry regarding the basic nature of the advertiser-agency relationship” and called for full “disclosure” of the media-buying process.

“Specifically, the study revealed that senior executives across the agency ecosystem were aware of, and mandated, some non-transparent business practices,” the ANA said in a statement released this morning, adding: “Contracts for rebates and other non-transparent business practices were negotiated and sometimes signed by high-level agency executives.”

Even worse, the ANA study implied evidence of potentially criminal activities. While it did not utilize that language specifically, it said the findings revealed “potentially problematic agency conduct concealed by principal transactions; as a principal, an agency (or its holding company or associated company) purchases media on its own behalf and later resells it to a client after a markup.”

The ANA was set to brief the industry later this morning, but the key findings indicate that non-transparent business practices employed by agencies, some of which may or may not have been contract-compliant, included the following:

*Cash rebates from media companies were provided to agencies with payments based on the amount spent on media. Advertisers interviewed in the K2 Intelligence study indicated they did not receive rebates or were unaware of any rebates being returned.

*Rebates in the form of free media inventory credits.

*Rebates structured as “service agreements” in which media suppliers paid agencies for non-media services such as low-value research or consulting initiatives that were often tied to the volume of agency spend. Sources told K2 Intelligence that these services “were being used to obscure what was essentially a rebate.”

*Markups on media sold through principal transactions ranged from approximately 30 percent to 90 percent, and media buyers were sometimes pressured or incentivized by their agency holding companies to direct client spend to this media, regardless of whether such purchases were in the clients’ best interests.

*Dual rate cards in which agencies and holding companies negotiated separate rates with media suppliers when acting as principals and as agents.

The ANA said the report detailed “source accounts from dozens of confidential, personal interviews as well as documentary evidence.” 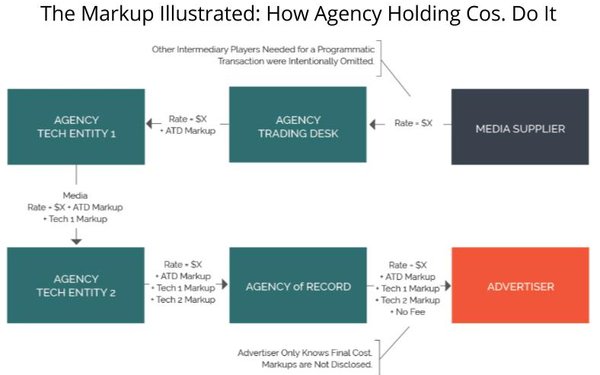