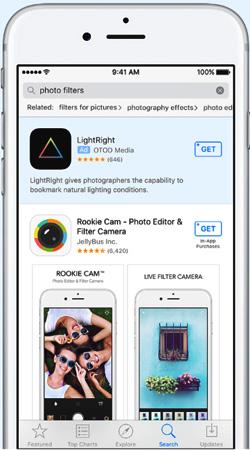 Apple confirmed Wednesday that it will introduce Search Ads in its U.S. App Store, validating a long-time rumor that it would launch a way to help developers and brands promote their apps in search results.

This fall one paid ad will appear at the top of the top of the page in the U.S. app store. The ad will have a variety of targeting features to enable individuals to discover the perfect app -- even lesser-known ones, or those with niche features.

When individuals search for an app by name or keyword, developers can bid on an advertising slot at the top of the search results lists, similar to how Google search works.

By default, a user will not see ads for apps they already have downloaded, and demographic and device location-based targeting will give you a new way to target those specific user groups that matter to you, according to the Apple Web site.

"Search in the app store is intuitive -- it's how mobile users want to discover apps on the device they want to use," said Scott Shamberg, U.S. president at the agency Performics, drawing an inference to the migration away from searching for specific items on Google and other main engines toward sites like Amazon and Yelp.

Shamberg believes Search Ads will accelerate this trend. Maybe not as a hockey stick, but it will accelerate the trend. The new ad unit also will significantly outperform iAD, which felt "reactionary," a way to capitalize on the promise of mobile.

"I think they took their time, waited for some level of critical mass and a tipping point on user behavior and can now take advantage of what is a known entity," Shamberg said.

"Some 5% of searchers in the store search for apps by name," he said. "That means there will be a very fluid and certainly competitive marketplace for the development of more generic, both brand and non-brand, keywords."

The Apple Search Ad will only serve up if it is relevant to the search query. If an ad is not relevant to the individual's search, it will not serve up in the ad spot, regardless of how much the developer is willing to pay.

"Apple will charge advertisers based on a Cost per Tap or target a Cost per Acquisition goal," wrote Macquarie Securities Analyst Ben Schachter in a research note. "Apple will only show one ad per search. We would expect the model to evolve quickly and allow for more re-engagement options. Apple also highlights that it will adhere to its relatively strict privacy standards and not allowed ads based on previous search activity, data from other apps, and will not show ads to IDs registered to minors under age 13."

Schachter also explains in the note that Apple plans to update its app subscription model to reduce its take from 70-30 to 85-15 split after one year of subscription.

Tim Villanueva, head of media partnerships at Fetch, call Apple Search Ads a "game changer," because it means app marketers can capture search intent in the app stores to promote their apps across both iOS and Android devices.

For years, the App Store has been plagued with the inability for individuals to discovery the perfect app, according to developers.

Andrew Kirkland, VP of business development at Newport Beach Candy Lab, an app developer, said it's a great idea. "They have all the data," he said. "Now they can push apps they think you would like and receive a higher conversion rate."

And push it will with help from aggregating data from searches.

In addition to previewing search ads in the U.S. app store, Apple will reduce the time it takes to review developers' apps and make them go live in the store. TechCrunch reports that the App Store review process has dropped to one day for many apps. Apple reviews about 100,000 apps per week, but it has now figured out how to make those reviews go faster. It now has a pretty consistent rate of reviewing 50% of apps in 24 hours, and 90% in 48 hours.