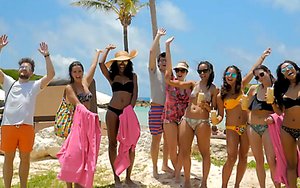 The Bermuda Tourism Authority partnered with Uber to whisk a bunch of riders to the destination with less than a day’s notice, resulting in a plane full of happy visitors to the "Jewel of the Atlantic.”

The promotion was announced on June 1. On June 2, Bermuda brand ambassadors were on hand in Uber black cars around the city to personally congratulate winners with true Bermudian hospitality. By early June 3, they were in the air, headed for Bermuda. The #BermudaSummerFridays hashtag campaign generated over 1.5 million impressions across more than 300 social media posts.

The summer-long campaign promotes how, in less than two hours, East Coast visitors from New York, Boston and Washington, D.C., can be on Bermuda’s beaches, instead of sitting in traffic on their way to the Hamptons or elsewhere.

Integrating efforts across multiple platforms, from pop-up events to public relations, influencer engagement, and advertising, the campaign provides a 360-degree approach that will bring to life why Summer Fridays should be synonymous with Bermuda, says Victoria Isley, Bermuda Tourism Authority chief sales and marketing officer.

The campaign builds on the momentum of Bermuda’s growing destination appeal, Isley says. Vacation air arrivals to Bermuda were up 13.7% in the first quarter of 2016 when compared to the same period last year, marking the best arrivals since 2008. More than 80% of the growth was attributed to travelers younger than 45 years old.

Broadcast, print, out-of-home and digital advertising schedule round out the campaign, with touch-points through digital content, taxi-top ads, magazines and email marketing.

A partnership with Daybreaker in New York, Boston, and Washington, D.C., aims to introduce the island to an active, energetic audience at early morning dance parties. Island-inspired décor, music, entertainers, giveaways, and other exciting elements will weave into these happy events that attract hundreds of influencers in the tech and creative space.

Additional partnerships include branded editorial and social media influencer campaign with the leading lifestyle digital media company, Refinery29, which will present a narrative about Summer Fridays as part of a lifestyle.

The Summer Fridays campaign also has a heads-in-beds element to serve BTA’s partners: Seven of Bermuda’s hotels are offering a “4th Night Free” deal for travelers who book their summer travels through Aug. 31.