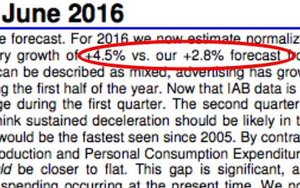 A month after describing the ad market’s first-quarter expansion as “frothy,” an influential Wall Street analyst has dramatically upgraded his outlook for U.S. ad spending this year to its greatest expansion in more than a decade.

“Advertising has grown much faster than we might have otherwise expected during the first half of the year,” Pivotal Research Group’s Brian Wieser wrote in a note to investors this morning, estimating that “it appears likely that advertising grew in the +6-7% range during the first quarter.”

While he expects the ad expansion to slow during the rest of the year, Wieser issued an upgraded forecast of a 4.5% expansion in the U.S. ad economy for 2016. That compares with a 2.8% expansion he last forecasted in December 2015.

Interpublic's Magna Global unit, coincidentally, also upgraded its outlooks for U.S. and worldwide ad expansion this year and next (see table below). Magna upgraded its 2016 expansion for the U.S. ad economy by a percentage point to a new projection of 6.2% vs. a 5.2% expansion it last predicted in December 2015.

For the global ad marketplace, Magna now predicts it will expand 5.4% vs. the 4.6% it predicted in December.

Despite continuing “mixed” signals in overall economic growth, Wieser said his analysis finds that big marketers have been expanding the percentage of their revenues they are investing in advertising, which is a strong signal that big brands are becoming more competitive. On the downside, he said tougher economic conditions mean they are generating lower overall revenues.

On an even brighter note, however, he indicated that significant “new advertisers” and categories are beginning to emerge to offset traditional brand spending.

Wieser, who calls this form of ad expansion “creative destruction,” cites “many in the pharmaceutical category, app developers and large technology companies such as Google, Apple and Amazon, who each have new consumer products requiring significant marketing support.”

The timing couldn’t be better for the looming 2016-17 upfront advertising marketplace, which is poised to break, and comes amid signs that demand has been tightening from major TV advertisers.

The combined effect of increasing scatter market demand, rising competitiveness from major brands and new brands and categories entering the marketplace, suggests this year’s upfront market could be stronger than forecasters initially expected. 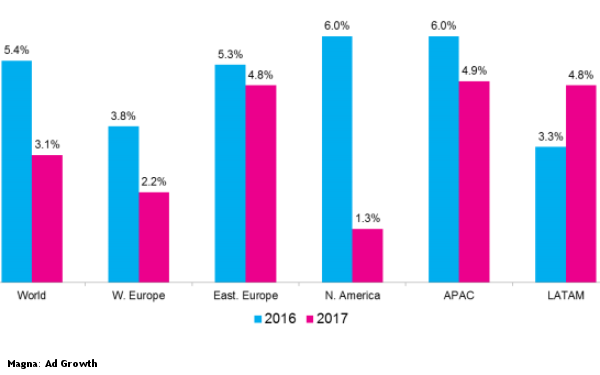