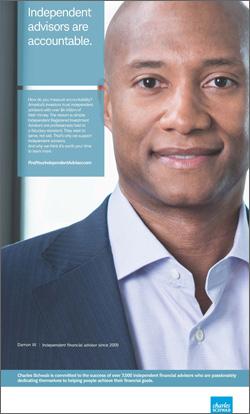 A Charles Schwab division is launching a national ad campaign to raise awareness of the benefits of independent financial advice among high net-worth investors.

Schwab Advisor Services created the campaign in partnership with The Richards Group. The integrated print and digital campaign breaks June 17 and marks the most significant marketing and advertising investment that Schwab has undertaken on behalf of independent advisors, says Susan Forman, senior vice president and head of marketing for Schwab Advisor Services.

“This multimillion-dollar campaign marks a fourfold increase in our investment versus what we’ve spent each year over the past few years,” Forman tells Marketing Daily, declining to give specific spending figures.

Print placements will appear in The Wall Street Journal, Barron's, Forbes, The Economist, CNNMoney, MarketWatch and Business Insider. Large-scale digital media and video rotations will be visible via online media properties, as well as through social media and paid search channels.

The campaign also features a new Web site, FindYourIndependentAdvisor.com, which features educational content about independent financial advice and a directory to help people find independent advisors in their area.

Creative aims to break through the confusion that exists among many investors about the difference between traditional advice models and the independent financial advisor, Forman says.

The company has been raising awareness of the registered investment advisor (RIA) profession and its many benefits for several years, specifically with the “RIA Stands for You” campaign since 2011.

“Yet investors remain confused about their options and don't understand the difference between the traditional advice model, which has the potential for conflicts of interest, and an independent financial advisor,” Forman says. “Confusion is further compounded by traditional firms that recognize independent advisor success and are trying to emulate it.”

The company is moving to a Schwab-branded campaign that strongly highlights what resonates with high net-worth investors about independent financial advisors' value proposition: independence, trust, accountability, fiduciary, she says.

“We want more investors to be better served by a model free of conflict,” Forman says. “From our research, we also know that independent advisors expect increased competition in the next five years, and that they see a strong need to differentiate their firms from the competition.”

The goal of the campaign is to raise awareness of the benefits the independent model offers to high net-worth investors, and to demonstrate the company’s support of the independent financial advice model to investors.

“Part of our mission is to educate investors by explaining the difference between the traditional financial advice model, and the independent advice model, in which advisors uphold a fiduciary duty to always act in the client’s best interest,” Forman says. “The campaign enables us to use our industry position to educate and influence investors about their options when it comes to financial advice.”

In fact, 75% of high net-worth investors said Schwab's name made them more likely to consider an independent financial advisor, and 93% rank “fiduciary standard” as the most important consideration when choosing an advisor, she says.

“It provides us with an opportunity to speak to investors who have yet to experience the type of service independent advisors offer – client relationships that are based in trust, commitment and accountability,” Forman says. “The independent advice model has a tremendous opportunity for growth ahead.”