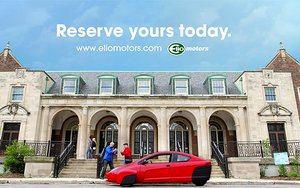 “We are building a low-cost, fuel-efficient vehicle that will create American jobs, reduce our dependence on foreign oil and help the environment,” stated Paul Elio, founder and CEO of Elio Motors.

“We see ourselves as “purple” politically — a mix of both parties that everyone can rally behind.”

The marketing campaign was developed by Onion Labs includes custom social infographics, an election-inspired video commercial and targeted media surrounding The Onion’s political content, which will run till the election.

The general sales pitch is that Democrats and Republicans disagree on many things, but hopefully they can agree on the draw of a low-cost, fuel-efficient car.

“You guys have already driven the country into the ground for the past eight years, give me the keys,” the Republican says.

“Isn’t there a statue of Reagan you should be making out with?” the Democrat taunts.

The video will be followed up with ads linked to The Onion's political content.

Another example of the campaign is a humorous Twitter photo, which reads: “The Elio has a fuel efficiency of up to 84 MPG.” Underneath, graphics of a donkey and an elephant are paired with the phrases: “Democrats: Great for the Earth but doesn’t make you look like a hippy” and “Republicans: Less money spent on gasoline means more money spent on ammunition!”

Elio is working to raises funds to start production on the three-wheeler. Full production is slated for 2017.