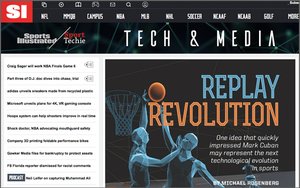 Sports Illustrated has launched a new vertical dedicated to the intersection of sports, media and technology. Called “Tech & Media,” the hub is a collaborative effort with SportTechie, a site covering the global sports and tech scene.

The new multiplatform vertical will feature “the latest on tech innovations, ideas and gear transforming fan experiences, player performance and the sports industry as a whole,” per a company statement. It will also feature native digital content.

“Tech & Media” will include reporting from SI journalists, daily contributions from SportTechie and sports media coverage from Richard Deitsch, a reporter from SI and an adjunct professor at Columbia’s Graduate School of Journalism.

Deitch’s “Media Circus” columns will also run on the vertical.

"From video replay to VR, from social media to wearables and the total transformation of the full spectator and athlete experience, the crossroads of sports, media and technology is alive with innovation and is an integral part of the sports landscape today," stated Chris Stone, Sports Illustrated editorial director. “These are deep-dive stories that no one is telling, and we are going to cover them across all of our platforms.”

This is one of the first big launches for Stone. As Publishers Daily previously reported, he took over for Paul Fichtenbaum, who stepped down after more than 25 years in the role. Stone previously served as SI’s managing editor for the last four years.

"Tech & Media" will host both short- and long-form video and social-media integration, such as a new social-first series spotlighting innovators from the sports and tech industries.

Long-form features will explore topics such as the development of FreeD, which could change instant replay for viewers and pro sports leagues with 360-degree views of the action, and how the new generation of influencers in sports are using digital media to build the industry's audiences.

This new collaboration with SportTechie will each more broadly across the SI Group, with collaborations slated for The MMQB vertical and other channels beginning this fall.