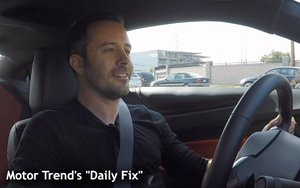 Motor Trend OnDemand, the video portal launched by TEN: The Enthusiast Network last year, is bringing viewers a behind-the-scenes view of the popular automotive media brand with the launch of a new online video and podcast feature, called “Daily Fix.”

It is hosted by veteran auto journalist Carlos Lago.

“Daily Fix” will bring viewers along as Lago and his colleagues check out the latest cars and automotive tech at the TEN offices and elsewhere. There will be ample time behind the wheel both on the street and at closed courses.

In addition to record daily episodes, the show will include a live broadcast every Friday afternoon.

In a video post announcing the launch of the new series, Lago emphasized that it will take a different approach from other well-known auto programs like “Top Gear,” which tend towards more elaborate productions.

By contrast, “Daily Fix” will have a less produced, more stripped-down feel, according to Lago: “With this more ‘run and gun’ less produced format, I can grab a camera, capture the magic and turn it around immediately.  The show will be the first of its kind to deliver new content to gearheads when, where and how they want it.”

The launch of the new regular video feature marks Lago’s return to TEN after a brief tenure at Edmunds.com. Before joining Edmunds he served as Motor Trend’s associate road test editor, and also wrote, hosted, and produced YouTube shows for TEN including Ignition, Head2Head, and Epic Drives.

On that note, the new show will feature guests and co-hosts from Motor Trend OnDemand’s other programs, including RoadKill, Dirt Every Day, Hot Rod Garage, Ignition, and Head2Head, among others.