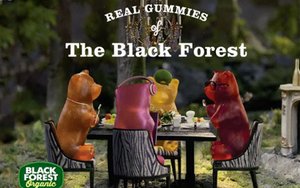 They may look cute and innocent (as gummy bears almost always do), but the stars of “The Real Gummies of the Black Forest” (#RGOTBF) are wont to gossip about neighbors, argue among themselves, and make thinly veiled allusions to sex, nudity and plastic surgery.

The company recognized an opportunity for confections to achieve a 5% to 10% share of the overall organic food category, which hit $39 billion in retail sales in 2014 and is growing at 15% annually. Looking to pioneer the estimated $400-million market for non-chocolate organic confections, Ferrara invested $25 million to create an organic infrastructure, and will spend $10 million to market them during 2016, according to Manchester.

So far, it’s looking like a good bet. The line is off to a “monumental” start, driving new users to the category at a rate seven times greater than other new non-chocolate confections, Manchester reports.  It’s also currently driving 17% of gummy peg-bag growth and ranking in the top 25% of all non-chocolate pegged items. And repeat purchase rates are 2.8 times higher than those for other organic snacks.

The campaign is designed to appeal to the line’s core consumer target: female Millennials (ages 25 to 34) who lead healthy lifestyles, and opt for gummies when they allow themselves a treat.

These “thoughtful candy enthusiasts” are heavy consumers of reality TV, as well as digital video and social media. The “reality” concept also ties into the “totally real” (no artificial flavors or colors) nature of the organic products, explains Manchester.

The videos feature a family of gummy bears, “The Organics,” who view themselves as special and superior because they’re organic.

In the first 30-second video (below), the son, “Junior,” asks his parents what it means to be organic. But he also lets it slip that dad (“Mr. O”) has eyes for the next-door neighbor, causing “Mrs. O” to hurl her shoe at her husband.

Two other videos will be released later this summer. One has Mrs. O again worried about a neighbor’s appeal to her husband — this time, because the neighbor has had certain “enhancements.” That allows for discussion of the kinds of artificial enhancements that some non-organic gummies use. The third video has a “streakers” theme that lends itself to reinforcing that Organic Black Forest gummies are comfortable going “au naturel.”

Ferrara ran a 30-second teaser trailer on its Instagram and Facebook channels prior to launching the first video episode on June 15. The team also created 15-second episode “recap” spots.

The video episodes will be pushed out across Black Forest’s social media, YouTube and other digital video channels.

Ferrara will also use the brand’s social media channels to build up each character’s personality with quotes and photos, says Manchester.

In addition, the Black Forest Organic Web site has been updated with “Real Gummies” content, including a page dedicated to introducing The Organics family.