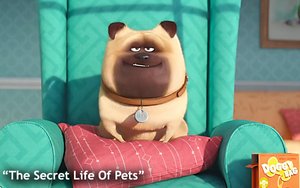 Universal’s upcoming theatrical release “The Secret Life of Pets” promises to show what domesticated animals do when their owners aren’t around. Through its home security products, sister company Comcast is ready to give them a sneak peek.

“The premise [of the film] is all about the activities of pets, and what they do when the owners leave,” Todd Arata, vice president of brand marketing for Comcast, tells Marketing Daily. “It seemed like a natural pairing with Xfinity Home.”

Among the elements of the campaign: a television spot that — much like the movie’s premise — gives owners a sneak peek into what their pets do when they’re not around. The spot begins with a number of owners saying goodbye to their pets, and leaving their homes. They check in periodically on the pets from smartphone apps and laptops to find them first doing cute things (eating tissue paper or barking at a mirror) to slightly more destructive activities (like making popcorn in a blender). One pet is shown accessing Comcast’s X1 Entertainment System on TV.

“We thought it would be a way to talk about our home product that’s fun and relatable,” Arata says. “It’s also how people are using the product already.”

Comcast has also geared its voice-remote to respond when people bark, meow or tweet like a bird to go directly to original “Secret Life of Pets” content, including alternate scenes, character bios and film information. “It’s all the stuff you’d find online, but we put it in one place,” Arata says.

In addition, Comcast will host smart-home tours and screening ins 12 markets before the movie officially opens on July 8. The tours will take selected customers and influencers through a tricked-out smart home showcasing all of the home security and automation devices and connected platform. After the tours, the groups will head to screenings where there will be more information and giveaways.

“Home automation is still kind of confusing for people,” Arata says. “For us to leverage this property is a nice way to talk about a product that people don’t know a lot about.”