Following significant upgrades for the 2016 ad economy by two leading forecasters, a third has downgraded its outlook for the year. Publicis’ Zenith unit this morning revised its global ad-spending growth forecast to 4.1% for this year, down half a percentage point from the 4.6% expansion it predicted in its last forecast in March.

While that's still an improvement from the 3.9% rate of growth Zenith estimates the ad industry had in 2015, it is the agency's second downward revision for 2016 since it first forecast a 4.7% rate of growth last December.

Zenith marginally upgraded its outlook for North American ad spending up one-tenth of a percentage point to 4.7% vs. the 4.6% forecast it made in March.

Zenith said it attributed the downward revision in its global ad forecast mainly to the currency devaluation in Argentina.

The agency, meanwhile, forecast that mobile Internet advertising will overtake desktop in 2017, making it the dominant factor in the digital ad marketplace a year earlier than previously forecasted. 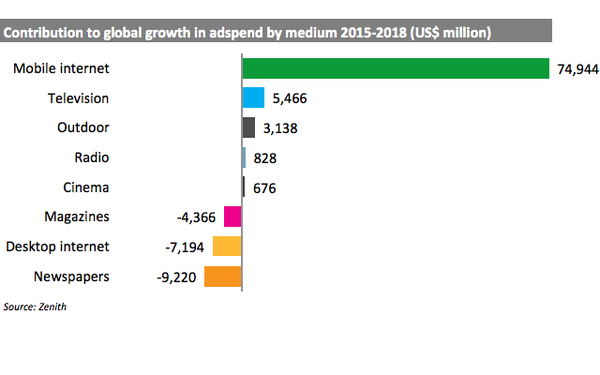