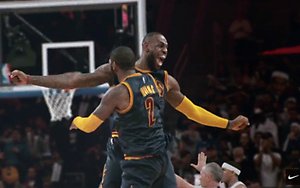 The company says that since King James laced up the shoe in game 4, he has been averaging at least 34 points per game, at least 12 rebounds, and nine assists. And while the Cavaliers made all kinds of sports history with the win — including James’ becoming the third basketball player in history to manage a feat known as a triple-double in Game 7; the Cavs being first team in history to battle back after being down three games to one, and Cleveland’s first pro sports championship in 50 years — it probably won’t make much of a difference in terms of Nike’s sales.

Sports fans — and sneaker buyers — are already worshipping at James’ Nike-clad feet. (Nike’s deal with James is reportedly worth upwards of $1 billion, its biggest ever.) “There will not be a big reaction to footwear sales in the short term,” says Matt Powell, VP at NPD Group, and industry analysts for sports sales. “But it will bolster LeBron's reputation.”

And likewise, it’s not likely to hurt sales over at Under Armour, home to Stephan Curry, the Golden State Warriors superstar. Some Wall Street analysts have estimated Curry adds about $14 billion in market value to Under Armour, possibly even coming close to the amount Michael Jordan brings to Nike.

When Under Armour released the new Curry shoes last week, the shoe snobs of Twitter made great sport of their ugliness, deriding them as plain vanilla, and as footwear mostly suitable for old people. And while that trash-talk flared up again after the Warriors defeat (“Maybe the nursing shoes were a mistake,” Tweeted one), Powell tells Marketing Daily Under Armour doesn’t have anything to worry about. “The negative reaction to Chef Curry shoe was way overblown. The shoe is selling briskly. Sneakerheads over value their own opinions.”

Variety reports that early Nielsen estimates make the game the highest-rated sports event on ABC or ESPN in a decade, as well as the best score ABC has ever earned from an NBA broadcast.