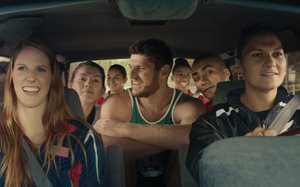 Visa is kicking off its global Olympics campaign that mixes some humor into its normally serious approach.

“Carpool” plays up the ways Visa will be accepted onsite at the 2016 Rio Olympic Games. Visa is the exclusive payment provider at the Olympic and Paralympic Games.

The spot features more than 20 members of Team Visa such as Missy Franklin (USA – Swimming), Ibtihaj Muhammed (USA – Fencing), Carli Lloyd (USA – Soccer), Kerri Walsh Jennings (USA – Beach Volleyball) and many other Team Visa athletes from around the globe, “carpooling” their way to Rio. Visa recently announced the expansion of Team Visa, a diverse group of 46 Olympic and Paralympic hopefuls from around the world.

Visa is calling it the “most ambitious integrated global Olympic Games campaign in the company’s history.” It will run globally across all media channels from digital to broadcast. The campaign features more athletes, more ways to pay, more geographies and more marketing channels than any other Olympic Games campaign in Visa’s 30-year sponsorship of the sports event, says Lynne Biggar, executive vice president, chief marketing and communications officer, Visa Inc.

Set to the music of Edwin Starr’s “25 Miles” and shot by the young up-and-coming filmmaker AG Rojas, the long-form film encompasses one global story that will be shown in over a dozen different cuts across the world. The film was shot in the United States, Brazil and Japan and includes input from markets such as Africa, Australia, Canada, Central Europe, Latin America, Mexico, THE Middle East and New Zealand. It will run globally with each market featuring a different carpool sequence that highlights local Olympic athletes using a variety of payment technologies, making it Visa’s most global campaign to-date.