Is There A Formula For Creativity? Just Ask Veronica 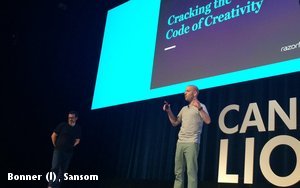 CANNES, FRANCE -- The most creative countries in the world are New Zealand followed by Argentina and France, according research from Razorfish and Contagious Communications released during the Lions International Festival of Creativity here.

Among the study’s findings the brand names of creative individuals also matter. Veronica has won more awards than any other female name and those named Marcello have taken home more Lions than any other male names.

The two companies analyzed 15 years of previous Cannes Lions in order to learn whether there are any notable patterns or trends that emerge among award winning campaigns.

There are some expected and surprising results. The top winning categories are radio, press, with outdoor ranking as the most awarded category. Within these fields, entertainment is most likely to win in radio, travel in press, and toiletries in outdoor.

Most people, however, will go home empty handed. There is only a 1.13% chance to win silver, .78% to win gold, and .07% to take home a grand prix. In all, 96% are losers. "There is a high standard to make the cut," says Will Sansom, director, Contagious Insider, Contagious communications.

Timing plays a role. Agencies and clients are not likely to win in their first year. "Why year one wobbler?" asks Daniel Donner, global Chief Creative Officer, Razorfish. Priorities are focused elsewhere or the honeymoon may be over, he says. However, agencies and clients need to stick together because awarding winning relationships peak in year two. "We call it the year two triumph," he says.

Agencies learn nuances while clients learn to trust the agency. Then, year three brings a dramatic cliff of complacency. Notably, committed relationships pay off with those having partnerships for more than 10 years are twice the average win rate.

"We know a lot of changes within our industry," says Sansom. "Our industry reaction is to change things up and if you look at [these results] a great productive relationship requires a long term investment."

Submissions with more below director level individuals are more successful as are entries with names across various fields.

There's a marginal difference between small and large agencies. There is also no real relationship between wealthiest countries developing the most awarding winning creative. The research analyzed GDP per capita among 35 countries with Philippines at one end and Norway at the other. The win rates of countries of wealth and success are scattered. Only three of the top 10 most creative countries are also within the top 10 GDP capita; 70% are not also the wealthiest.

Ultimately, "great creativity isn't exclusive," says Sansom. "It comes down to people and how they behave and work. It's about relationships."